I’ve been debating how I would review TV shows. I’ve already reviewed a couple and I definitely enjoy talking about them, but I wasn’t sure if I wanted to do individual episodes, full seasons, or full series. I think that ultimately, I’m going to go with a mix of options, but for Fuller House Season 4, I’m going to review the season since my wife and I watched it last week. I’m a sucker for nostalgia and Fuller House plays into that so well. Netflix has done an amazing job of creating a series that appeals to those who didn’t watch Full House but ropes in all of the Full House fans at the same time. They accomplished much of what Disney accomplished with Girl Meets World, however Netflix is smart enough to keep it going, while Disney decided to disappoint the world.

One of the most interesting aspects, that I noticed for the first time this season, was the similarity to Full House with the adult characters. It was clear from the get go that Kimmy was Joey’s replacement, while Stephanie was the cool, musical aunt replacing Uncle Jesse. It was, however, still a Candace Cameron-Bure show in my eyes, and she was the star. I felt like this was less true this season, D.J. is still the focal point, but she’s less interesting and much less entertaining than both Kimmy and Stephanie and I felt like the show did a better job of bringing the two of them onto centre stage.

The main arc of the season is Kimmy carrying Stephanie and Jimmy’s baby. This creates some amazing moments, including a very touching Chrismas episode as the first episode of the season. Some of the seasons highlights were definitely an appearance by Fernando’s mother and a 70’s boat cruise. The latter included a nice throwback to Full House with the S. S. Papouli lifebuoy. We also got our first full season of the return of D.J. and Steve, which was awesome… Steve was always one of my favourite characters on Full House. There is an episode where they compete to give each other the best two-week anniversary gift. D.J. buys Steve a 14ft party sub (“one foot for each day we’ve been together”), and Steve makes a reference to it being good enough to appear in Sandwich magazine, but he quickly points out that he, “only reads it for the articles.” They also had D.J. and Steve attend D.J.s son’s prom as chaperones, so that they could attend prom together and included multiple references to the Full House finale, where Michelle had amnesia .

In the end, Fuller House is a happy reminder of simpler television. We don’t have many shows that would fit in the old TGIF line up these days, so it’s great that Netflix is giving us a series like this. I’ll watch it for as long as they make it simple due to the nostalgia (which may have biased my rating here). If you’re not watching it, you probably should be… especially if you fondly remember Full House. 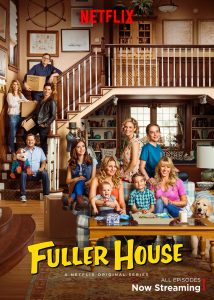 I grew up in New York City. From a young age I was struck by the impact of poverty, drugs and violence afflicting those around me. Although the city has changed, I am still troubled […]