Santa Claus is on the government payroll? Well he is in Fatman the latest movie from the Nelms Brothers, a writer/director team that previously gave us Waffle Street, which was an awesome film. This new Mel Gibson Christmas film takes a look at the holidays in a new and exciting way. I’m not sure exactly how to describe it, but I think calling it The Santa Claus meets Die Hard is probably a pretty good way to sum it up. I think, at the end of the day, the easiest way to describe the film is simply, “Entertaining!”

Chris (Mel Gibson) aka Santa Claus runs his operation up north and tracks if kids are good or bad, just as he does in all the typical Santa themed films. That’s where the similarities end as Chris is receiving a subsidy from the US government to cover wages for his elves and materials for manufacturing. However, with the continued moral decay of society, fewer and fewer children are good and deserving of presents. Instead, he’s handing out a lot more coal and doesn’t meet the minimums for his subsidies. So, instead of the usual jolly Santa Claus, we have an overworked, unappreciated stressed manager struggling to meet his budget. There’s something amusing about that concept alone to me. While this film is more action than comedy and the comedy is a bit darker, I think it would be entertaining to see The Santa Claus meets Office Space in a film.

With that as our story setup, the film explores two plot lines that ultimately collide. In the first, a horrible kid, Billy (Chance Hurstfield), angry over getting coal, hires a hitman (Walton Goggins) to kill Santa Claus, while the second involves Santa renting out his factory to the US Military to manufacture control systems for them. It really is an entertaining melding of stories and Mel Gibson was the perfect casting choice for Chris. The film involves a bit of comedy, a lot of action, and its just the right about of absurdity.

There will be playful moments in Fatman, but it is a sophisticated story that’s shrouded in myth and social commentary. We’ll be juxtaposing two very different environments in the film: the rural, backwoods of Alaska and the wealthy suburbs of Minnesota. These two, diametrically opposed settings parallel many of the growing pains we face in America today. Chris and Ruth are the old-world becoming obsolete and out of touch, relying on a time when hard work and strong moral values were the recipe for success. Billy and the Skinny Man are the new wave. They bully competitors and have no problem lying, cheating, and even killing to get what they want. When these worlds collide, there will be a reckoning.

The film has a few surprising scenes that are shocking, so I won’t spoil them… but there were a couple of times when I went, “Woah!” or exclaimed, “WHAT!” while jumping out of my chair. The film is supposed to be somewhat ridiculous, a 12 year old who is so spoiled that he will stop at nothing to win a science fair takes out a hit on Santa Claus, but at the same time when I look at today’s youth, it seems believable. The world’s moral compass has definitely shifted within the masses and I think this film takes that shift and demonstrates it in the most ridiculous of ways. It is Gen Z vs Baby Boomers in the ultimate death match.

I enjoyed the movie, but I enjoyed it more after reading the words of the Nelms Brothers, I think they do a better job of describing it than I ever could.

Make no mistake, our Santa Claus is a superhero. He doesn’t leap buildings or run faster than a speeding bullet, but he does have gifts that make him extraordinary. This story will forego today’s cinematic trend of putting everything on steroids, which only serves to numb audiences into indifference. It will be grounded, character conscious, and exist in a world where action and set pieces are earned. The film will be entertaining, but also layered with themes of neglect, overindulgence and consumerism. It will keep audiences engaged by subverting expectations and transcending genre. This is a superhero film, wrapped with thriller, dipped in western and sprinkled with satire.

Fatman is available now wherever you rent videos. 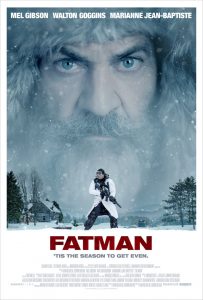 Movie description: To save his declining business, Chris Cringle (Gibson), also known as Santa Claus, is forced into a partnership with the U.S. military. Making matters worse, Chris gets locked into a deadly battle of wits against a highly skilled assassin (Walton Goggins), hired by a precocious 12-year-old after receiving a lump of coal in his stocking. ‘Tis the season for FATMAN to get even, in the dark comedy, action film that keeps on giving.