Domino has all the pieces it needs to be a great film – Brian De Palma directing, multiple Game of Thrones stars in the cast, and a plot filled with terrorism and intrigue – all it was lacking was a script. The writer, Petter Skavlan, doesn’t really have much to his credit and it shows with this film. The dialogue was weak and failed to captivate. With a better writer behind the story, I suspect this would have garnered more than the 1.5 stars that I’m giving it.

When I first became aware of this film, I was very excited. Brian De Palma directed Scarface, The Untouchables, Mission: Impossible, Snake Eyes, and many other well known films. I didn’t enjoy The Black Dahlia and I haven’t seen any of his more recent films, but I’m thinking that maybe he should have stopped directing back in the 90s. There are a few moments, where the camera forces you to acknowledge the foreshadowing. At one point, when Christian (Nikolaj Coster-Waldau of Game of Thrones) forgets his gun while leaving for work, the camera slowly zooms in on the  firearm for what feels like an eternity. The exact same technique is used later in the film, except the target of the zoom is a pair of phone charging cables.

The complex story, packed into a mere 90 minutes, jumps across countries and continents, always pushing the viewer into the deep-end. I felt like I needed to sit at attention for fear that I might miss something. Yet still it felt too long. Perhaps because it was backed up with bad acting and, as I mentioned before, poor dialogue. When Christian gets bad news while driving, his delayed and awkward reaction reminds of me the quality of acting you’d see at an elementary school assembly that parents are forced to attend. My favourite scene involved two police officers rushing through airport security still carrying their guns. They’re clearly in a rush and the security guard asks for their paperwork to allow the guns to pass. They ask for the paperwork to fill out and are informed there is 3-day advanced notice required. When you’re in a rush, who asks to fill out paper work? Eventually, they hand over their guns and continue through security, but I think this nicely sums up the awkward nature of the entire film.

The film has two redeeming moments. The first is a “scuffle” (we can’t really call it a fight) and death near the beginning of the film and the final fight at the end of the film. The final scenes of the film could have been drawn out about 10 to 15 minutes longer (although 10 minutes could have been shaved of the very anti-climatic slow flight of a drone that we were forced to watch – instead of building tension, it made me wonder if I wanted to finish the movie). There were a couple of scenes in the film that I would have cut and a couple that should have been extended. I’ve seen a few movies lately that have clocked in at the 70 minute mark and I don’t think there’s any shame in that. If this movie picked up even 5 minutes in the final fight scene and shaved itself down to 70-75 minutes, I think it would have been a lot more enjoyable. I’ll also say that I was shocked by the graphic nature of the terrorism related scenes, I was surprised by how much they showed, it definitely came as out of place given the slow pacing of much of the film, but maybe that’s the shock they were going for.

At the end of the day, this is the type of movie that I would recommend watching in two situations. The first is if you are a Brian De Palma completionist. If you are, you are already planning on watching this. Otherwise, I would recommend this film if you see it on a streaming service that you’re already paying for and you’re going to be doing something else at the same time. I wouldn’t sit down and set aside 90 minutes for this film, but as a filler while doing homework or folding laundry, it would be a decent experience. 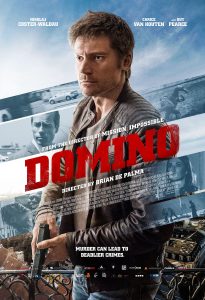 Movie description: In a world wracked by terror and suspicion, Copenhagen police officer, Christian (Nikolaj Coster-Waldau), seeks justice for his partner’s murder by an ISIS member named Imran. On the hunt for the killer, Christian and a fellow cop are unwittingly caught in a cat and mouse chase with a duplicitous CIA agent (Guy Pearce) who is using Imran as a pawn to trap other ISIS members. Soon Christian is racing against the clock – not only seeking revenge, but to save his own life.