As a child, David Kurtz emigrated from Poland to the United States. In 1938 he returned to Europe for a sightseeing trip and whilst there he visited Nasielsk, the town of his birth. Specifically for this trip, he bought a 16mm camera, then still a novelty rarely seen in a small town never visited by tourists. Eighty years later his ordinary pictures, most of them in color, have become something extraordinary. They are the only moving images that remain of Nasielsk prior to the Second World War. Almost all the people we see were murdered in the Holocaust.

I wasn’t really sure how to introduce this review, so I felt that allowing the director’s own introduction set the story was the best approach. When you read those words, it is hard not to feel the urge to find out more, to understand why this footage exists and how this film came to be made. For that, I’ll, once again, yield the floor to Stigter.

On Facebook, I stumbled upon a book written about this film, Three Minutes in Poland by Glenn Kurtz. The title fascinated me. I ordered the book and watched the footage, which can be found on the website of the United States Holocaust Memorial Museum. While watching, I wondered: could you make those three minutes last longer, to keep the past in the present?

This 72 minute documentary digs deep into the three minutes of footage that David Kurtz filmed, found by his grandson, Glenn Kurtz, which inspired him to write Three Minutes in Poland. The film preserves a small piece of history that most of us are unlikely to ever encounter. I’m not sure about most people, but I don’t often find myself watching videos posted on the United States Holocaust Memorial Museum’s website. This documentary takes something that is available for all of us to watch and expands on it. It provides context and personality. It gives a momentary voice to those who were murdered so many years ago. For that reason, the documentary is interesting and worth watching.

The film is, however, not without issue. I often find myself claiming I dislike documentaries and then falling in love with any documentary that I actually sit down and watch. This film, however, reminded me of why I generally dislike documentaries. It commits the greatest documentary sin – padding for additional running time. While 72 minutes may seem short, it is still longer than this film needed to be. Keep in mind that we’re talking about 3 minutes of footage that is looped, reversed, and paused for the majority of the films running time. At one point, the narration points to the trees that line the streets, but that doesn’t really go anywhere or provide new insight. Similarly, too much attention is given to the momentary appearance of birds in the background of the footage. These little tidbits don’t add to the story and really just delay the film’s conclusion.

At the end of the film, a memorial pays tribute to each face featured in the footage by building a photomontage. This is an amazing tribute and feels like it truly deserves a moment of silence. It takes a while to complete the photomontage and feels like it drags on. I feel horrible saying that and it feels wrong to even think it, but it is true. The reason that it drags on is that every featured face is included, even if the person is already in the photomontage. So, instead of building row upon row of images, we get images that backtrack and display an already displayed face. I understand that I’m not explaining this well. Suffice it to say, I would have loved this tribute if each face was shown and the memorial photomontage was built. Instead, you see some faces once (because they only appear once in the footage) and other faces multiple times (because they display each appearance of the individual). This felt like it took away from the moment as I watched it.

With all of that said, this is a rare bit of footage that we are lucky was found and preserved. The stories of some of the individuals involved and the recollections that are shared are special and I think that people should watch and hear those parts. I just feel like the extra bits that were added just to extend the running time did so to the detriment of those special moments.

Three Minutes – A Lengthening will be released in LA and NY theaters on August 19 with additional theatrical engagements to follow. 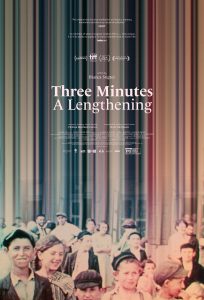 Movie description: Three minutes of home movie footage, mostly in color, shot by David Kurtz in 1938, are the only known moving images left of the Jewish inhabitants of Nasielsk, Poland, before the Holocaust. Those precious minutes are examined in intricate detail to unravel the human stories hidden in the celluloid. Tracing the story of those three minutes begins with the journey of Glenn Kurtz to discover more about his grandfather's film, ultimately leading to identifying people and places otherwise erased from history, and helping to connect a Holocaust Survivor with his lost childhood. Co-Produced by Steve McQueen (Director, '12 Years a Slave'). Narrated by Helena Bonham Carter.

I really wasn’t sure what to expect with Waiting for Anya, my wife is a fan of period pieces, but I tend to prefer films set in modern day (with an exception for medieval films). I […]