Tonight, I endured Endings, Beginnings. I say endured because it was a painful film to watch. I’m not sure what the director, Drake Doremus, was going for, but if it was jump cuts and a feeling that the camera was in the hands of someone who is easily distracted, then I’d say mission accomplished. I suppose the goal was an “artsy” feel, but it was lost on me. Instead, we got continuous dialogue over jump cuts that move throughout the scene, moments with hazy/foggy lenses, and attempt to fit months of backstory into the first few minutes of the movie. The entire pacing of the film was off, as it moved forward quickly from the initial scenes to Christmas to New Years in minutes, then the pacing somewhat slowed down, but weeks worth of story progression were allotted only moments on screen. Overall, the cinematography of this film is a train wreck.

Yet, that isn’t where the problems with the film stop. Matthew Gray Gubler is given billing in this film and I’m a big fan of his, but I had to revisit the credits to figure out who he played in the film, his appearance is so fleeting, that it isn’t worth mentioning. Yet, Wendie Malick has plenty of dialogue and scenes and she’s barely mentioned. That said, the casting of this movie is what inspired me to watch it. Shailene Woodley along with Gubler and Malick are all favourites of mine on screen. Oddly, however, the film’s main star was an odd choice and not mentioned in the credits. I’m sure plenty of people assume I’m referring to Woodley, who is very clearly mentioned. I am, however, referring to the cigarette. It’s been a long time since I saw cigarettes featured so predominantly in a film, yet they are a key aspect of the movie and get more screen time than any other cast member.

The film itself is about… well…  I’m not entirely sure. Woodley’s character, Daphne finds herself single, unemployed, and living at her sister’s house, when she meets two guys, falling for both of them and learning that they are best friends. At this point, Daphne continues relationships with the two friends, while lying to them both and sneaking around… including one scene where she climbs out of bed with one man to text the other. Daphne is also trying to stay sober, but quickly throws that away to drink with the two guys. Daphne has no redeeming qualities and is entirely unlikable, which is a testament to Woodley’s ability as an actress because I found myself disliking her by association while watching the film.

With a running time of 110 minutes, you spend 95 minutes watching Daphne basically implode with bad choices and questionable actions until the film does a complete 180 and, suddenly, we have a story that’s interesting. I would LOVE to see the script for this film, because if the last 15 minutes are any indication, the film might actually have a decent script but the direction and cinematography ruin any chance of it being a decent film. The sound mixing was almost as bad. I typically watch a movie with my TV at 30 (out of 100), but at various points in the film, I had to adjust the volume from 25 all the way up to 55. I understand turning down an action film with explosions and gunfire, but this was a drama and the volume changes seemed ridiculous.

At the end of the day, I wouldn’t pay to see this film, but if you are a fan of Woodley or want to know more about the 180 the pull at the end of the film, it might be worth checking it out when it hits a streaming service. The film is available on digital on April 17 and on demand on May 1. 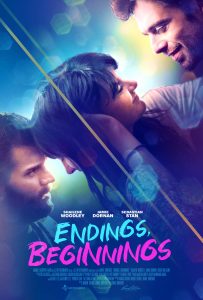 Movie description: In present day Los Angeles, Daphne (Woodley), a thirty something woman, navigates love and heartbreak over the course of one year. Daphne becomes intertwined with friends Jack (Dornan) and Frank (Stan) after meeting them at a party. During that time, she will unlock the secrets to her life in a sudden turn of events and in the most surprising of places.

Mr. Jones is a long, slow film… not MCU long, but long none-the-less. The film, advertised as a biopic, tells the story of Gareth Jones, a Welsh journalist that broke the news of Holodomor and […]