I made sure that I slept on Luxor before writing about it. Often, I find that when I dislike a film that letting it sink in for a day can change my opinion or at least soften it. That wasn’t the case with Luxor, I’m still not sure what I watched or why I watched it. I should point out that I’m clearly in the minority on this one as it has a 97% on Rotten Tomatoes. I honestly cannot explain the reasoning behind my view and that of the critics on Rotten Tomatoes, but I can share my thoughts on the film.

Let me start by saying that the trailer for this film is amazing. Whoever cut the trailer should be rewarded handsomely. Based on the trailer, I went into this movie really excited. It looked like an awesome romance with a main character who was troubled and imperfect.  If the film had the pacing of the trailer, I probably would have enjoyed it a lot more. The trailer moves at a decent pace, the film, on the other hand, could get lapped by a snail it moves so slowly. Additionally, the trailer includes most of the film’s dialogue, the movie is filled with large swaths of silence.

The dialogue is probably worth delving deeper into. There is almost no dialogue in this film. If they were trying to mimic Larry Hama’s G.I. Joe #21 Silent Interlude, they failed. They did not tell a complete story with the dialogue that was included. I find that this is a troubling trend. First, we had films that were left open ended, because the writers or director wanted to avoid angering fans, which was a complete cop out. Now we have films that don’t tell a complete story, they lose a lot of meaning without the director’s notes or a background packet that are usually reserved for press. In this case, it feels like writer/director Zeina Durra simply forgot to include a plot. Instead Durra gives us moments of interaction void of all meaning, which makes it impossible to push the story forward.

Additionally, the story falls over many times. From interactions with minor characters that feel out of place or lacking setup to statements that are completely disconnected from the rest of the film and never further investigated. If you are having a hard time imagining this, let me set it up for you a bit better. Image that you are handed a book to read – 400 pages, 20 chapters – except that the book is incomplete. Instead of the full book, you get a random sampling of pages, perhaps one from each chapter. Then on each page, random sentences have been scribbled out. Reading the result is how you’ll feel watching Luxor. Although, you will be reading Luxor as well because the audio quality is so bad that you have to turn on closed captioning in order to understand what is being said, the audio engineers were definitely not on point with this film.

The lack of plot and dialogue is really disappointing because Hana, our lead Andrea Riseborough, did a great job in her scenes, as disconnected and random as they were. She is clearly a brilliant actress, but she wasn’t given a lot to work with. If you want to see an actor attempt to make something out of nothing, then consider watching Luxor just for Riseborough’s performance. The only other reason I could think of to justify watching the film is the setting.

The entire film was shot on location in Egypt and the scenes are beautiful. I could have muted the movie and just watched for the scenery while listening to an album and it would have been a much better experience. I guess that means that the cinematographer, Zelmira Gainza, deserves a lot of credit. I loved some of the sweeping shots and close ups of the surroundings… the country is clearly quite beautiful. My wife actually commented that the film must have been funded by the Egyptian Tourism Authority because it made us both want to travel to Egypt in the future. However, there’s nothing to indicate that’s the case.

If you’re looking for a beautifully shot film without a plot, Samuel Goldwin Films will release Luxor On Demand and Digital December 4. 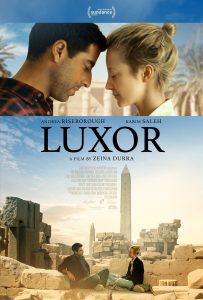 Movie description: When British aid worker Hana returns to the ancient city of Luxor, she comes across Sultan, a talented archaeologist and former lover. As she wanders, haunted by the familiar place, she struggles to reconcile the choices of the past with the uncertainty of the present.