John DeLorean. When you’re a certain age, my age, that last name has a lot of nostalgia tied to it. Without the DeLorean, we wouldn’t have Back to the Future (as least as we know it) and without John DeLorean, we wouldn’t have the DeLorean, so it has be a name you recognize. When you’re given the option of reviewing a biopic about the man who made the car that made one of your favourite films, you jump at the opportunity. So, I found myself watching Driven, the story of John DeLorean and his neighbour, FBI Informant, Jim Hoffman. It’s a story that involves drugs, cars, cash, and the famous quote, “Would you buy a used car from me?”

Before we talk about the film itself, let’s talk about one of the most interesting aspects of the film, the filming location. This movie was filmed on location in Puerto Rico and was interrupted by two hurricanes, including Hurricane Maria. After ensuring everyone was safe, they made the decision to continue with the film, something that the film’s director, Nick Hamm, spoke about.

Maria had destroyed the island’s entire power grid and cell towers. Production struggled to contact the local crew but slowly phone calls were made and we confirmed that everyone was safe. We then had a decision to make. But how could we possibly return? I spoke to the actors and producers, and the decision was made that if it was at all possible, we should continue making the film. Not only because it was the right creative choice. But it was the humanitarian choice.

We were employing over 200 people locally who needed a pay check now more than ever. To their great credit, not a single actor, producer or non-local crewmember refused to return to the island. In fact, they were determined not only to finish but to help in any way possible with reconstruction.

We were fully cognizant of what our local crew was going through. Our 1st AD had watched the roof of her house get peeled back like the top of a sardine can, while her family huddled in a corner. Our make-up artist waded through floodwaters with her son. Our picture car coordinator sat up through the night with a shotgun for fear of looting. These are just a few of the stories of Hurricane Maria, and there are countless others. But our crew adamantly believed in the story we were telling and at a time when the entire economy of Puerto Rico came to a standstill, this film was a way to recover their homes and lives.

Using whatever resources we had, working without power, gasoline, rationed water, eight-hour ATM lines, police curfews, even basic communication – we came together to make our film a reality. We worked six and seven consecutive days. There was a collective desire to create a great movie that we could all be proud of.

I believe, more than anything, that their faith, dedication and determination made the film what it is.

I respect that a lot, it makes me want to buy a copy of the film, just to support the production. All too often, we hear about celebrities that are pretentious or cruel, that want a specific brand of sparkling water, have specific demands when filming, or are just difficult to work with. Here, you have an entire cast and crew that moved forward without power, with rationed water… I can’t even imagine what filming was like, but I would love to see a behind the scenes of how difficult it was to make the film.

When talking about the film itself, it’s actually a decent flick. The story is pretty interesting, based on a true story, with a lot of guesswork filling in the missing pieces. The story centres not on John DeLorean, but on Jim Hoffman, his neighbour. Jim, played by Jason Sudeikis, is caught smuggling drugs for Morgan Hetrick (Michael Cudlitz) and becomes an informant for the FBI, relocating his family, and, coincidentally, moving in next door to John DeLorean (Lee Pace). Initially, Jim and John’s kids become friends, eventually leading to social interaction between the two men. As they become closer, Jim becomes aware of John’s financial woes and, eventually, a drug deal is arranged. The film follows both the lead up and fall out from that drug deal and subsequent court case.

The writing on this film was great. I found a lot of the scenes to be humorous and, at times, emotional. Writer Colin Bateman did a great job of bouncing around emotionally and giving us a well rounded story that fills in some of the unknowns. While the trial is clearly quite famous, a lot of the background of how we get to the trial and what happened afterward isn’t as well documented, and this film tries to fill in those missing pieces. The films director asks:

So – was John DeLorean a con man with shiny hair or a creative genius? Was Jim Hoffman a depraved scumbag or a friend whose past damaged those around him? To be honest, I don’t know. The fun of the film is not knowing.

They are interesting questions, that I don’t know the answer to, but I’d love to know more. I’d love real insight into whether or not DeLorean was a con man and if Jim was just caught between a rock and a hard place. Additionally, I enjoyed the direction the film went with the ending, I enjoyed the reasoning and justifications that they created in various scenes. Watching this, knowing that some of the blanks were filled in, I felt like the film gave me a realistic option for what those blanks could be. With a great story, an awesome cast, and a great director, I’d be really excited to see a round table commentary regarding this film.

You should check this movie out in theatres, on demand and digital August 16. 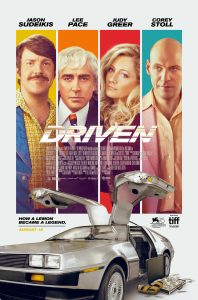 Movie description: A fast-paced, comedic crime thriller of a bromance gone wrong between John DeLorean, played by Lee Pace (Captain Marvel, Guardians of the Galaxy, The Book of Henry, The Hobbit: The Battle of the Five Armies), and Jim Hoffman, played by Jason Sudeikis (Colossal, Booksmart). Set in early 1980s California, the story follows the meteoric rise of the golden boy of the automotive industry, John DeLorean (Pace) and his iconic DeLorean Motor Company, through the eyes of his friendship with charming, ex-con pilot turned FBI informant, Jim Hoffman (Sudeikis). DeLorean turned to unsavory activities to save his financially troubled DeLorean Motor Company, and it was Hoffman who was all too willing to lure the car designer/engineer into a cocaine trafficking ring set up by the FBI. Isabel Arraiza is Cristina DeLorean, DeLorean’s fashion model wife, Judy Greer (Ant-Man, Jurassic World, War for the Planet of the Apes) is Ellen Hoffman, Hoffman’s direct, no nonsense wife and Corey Stoll (First Man, Ant-Man, Midnight in Paris) is ambitious FBI Special Agent Benedict Tisa.