Another Netflix series Christmas series. My wife has said that neither The Christmas Chronicles nor The Princess Switch are as good as The Christmas Prince and I think she’s right, particularly when it comes to sequels. The Princess Switch was an enjoyable film. The Princess Switch: Switched Again was also an enjoyable film, but I didn’t feel as invested. At first, I thought I was just soured to Christmas 2020, but I don’t think that’s the case, as I’ve really enjoyed a number of things I’ve seen. I think it’s just that the films don’t hold up to their originals. Don’t get me wrong, we’re not in Home Alone 3, 4, or 5 territory yet with these series, but they’re starting to teeter on the line between good and mediocrity.

In The Princess Switch: Switched Again, we find our lookalikes both involved in ruling their respective nations. Margaret (Vanessa Hudgens) is to become Queen and, as such, things ended between her and Kevin (Nick Sagar). At the same time, Edward (Sam Palladio) is trying to find some alone time with Stacy (Vanessa Hudgens), but she’s too busy to spend any time with him. Stacy and Edward are off to spend time together, but first she takes a trip to Chicago to convince Kevin that he and Olivia (Mia Lloyd) should attend Margaret’s coronation. Once everyone has arrived, they get in the Christmas spirit, decorate, host a party, and we meet the third lookalike, Margaret’s cousin, Fiona. It is at this point that the “hilarity” ensues. I put that in quotes because there isn’t as much humour as I’d like there to be in a movie that calls itself a comedy and has multiple role switches.

After I read the script I thought, Oh man, this is going to be a lot of work! Three of me? Me, myself and I!? But I was very excited to create yet another character and had such a blast doing so. I had no idea how much fun it would actually be.

I think that part of the problem with this film is that it doesn’t know what type of movie it is. Is it a holiday movie? RomCom? Comedy? Drama? It’s a great family movie for the holidays, but it’s a little bit of everything and that pulls the film down just a little bit. I think another detractor for me was the Fiona character. She was just so over the top that it was unbelievable that she managed to exist for even a moment as Margaret. The big thing for me in this movie was the amount of disbelief I had to suspend at times. I know movies are all about suspending disbelief, but at times I felt like this asked for too much. I’m not sure that I buy that a modern country doesn’t fingerprint people and, specifically, doesn’t have fingerprints on file for their royalty. While I can believe and accept willing switches, a malicious switch when both parties are free and their fingerprints could be compared doesn’t make sense. I’m sure I’m supposed to overlook that, but I can’t. I think that the rules change when you have a criminal switch, that is for the gain of one at the detriment of the other and when both aren’t willing parties. I think that plot point needed a little more planning.

Other than that, I did enjoy the movie and had a lot of fun watching it. Everyone did an amazing job and it was nice to see the magic of the first film return in this one. (If you know what I mean, great, if not… you’ll figure it out). It was also nice to see a cameo that further extended Netflix’s Holiday Movie Universe (yes, that is what Netflix is calling it).

The movie is streaming now on Netflix. 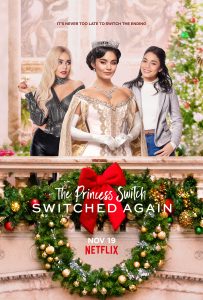 Movie description: When Duchess Margaret unexpectedly inherits the throne to Montenaro and hits a rough patch with Kevin, it’s up to her double Stacy to save the day before a new lookalike, party girl Fiona foils their plans.