After watching Contracts, I found myself on the phone with my dad and I tried to describe the film to him. The best that I could come up with was that the 80s and 90s action movies we watched with Chuck Norris, JCVD, Seagal, and Stallone were Oscar worthy compared to this film. The film’s big claim to fame is that it won Best Action Film and Best Fight at the 2019 Toronto After Dark film festival. A lot of good films have come out of Toronto After Dark, but Contracts didn’t really have a lot of competition as only two other films even had the word action in their description. I will, however, give it credit for the Best Fight win… the fight choreography in the film is top notch. This shouldn’t be surprising since Alex Chung has made local Toronto news for more than 15 years for his fight choreography and stunt skills and he’s had stunt performance credits on a number of top notch series including Star Trek: Discovery, The Expanse, Titans, The Boys, Arrow, 12 Monkeys, Killjoys, and more.

So, if the film has such a skilled and talented fight choreography, where did things go wrong? If you’ve heard of “too many cooks in the kitchen”, I feel like this film had the opposite problem. Alex Chung was the star, writer, director, producer, fight choreographer, and editor of the film. That’s not enough cooks in the kitchen. Alex is a decent actor (compared to most of the cast he was an amazing actor) and a brilliant fight choreographer, but he’s not a great writer. The film had awful dialogue and the story was rather weak. Honestly, had it not been for the fight scenes, I doubt I would have finished the film, but they were really good and kept me on the edge of my seat. They brought the film from a 0-star review to a 1.5 star review.

What were the problems with the film? While Chung is a decent actor as was Michael Carter, the actors who needed to be good – Neil Bishop as Constantine, Dan Sanderson as Blake Morris, and Jermaine Carty as Marc Sullivan just weren’t. They delivered stiff, wooden performances that I feel were best summarized by my wife when she said, “I feel like I’m watching a high school play.” As I mentioned previously, the writing was not good. The film didn’t have a decent setup and did little to develop the story or characters. It was written to produce a feature length film that demonstrated Chung’s abilities as a fight choreographer and it did that, but it didn’t do much else. One of the biggest tells in a film is the lack of contractions. I’m not sure why… if it’s the writing or the actors, but poorly done films always lack contractions. It makes the dialogue feel unnatural. Imagine Star Trek: The Next Generation where ever character sounds like Data.

While I keep gushing over the fight scenes and, I will repeat myself again, they are amazing, the cuts are not great. You can see that the “steel bars” are actually painted foam and the prop knives don’t look realistic. Additionally, the exact same sound effect of a knife strike is used for EVERY. SINGLE. SWING. of any knife. During several of the knife fights, they are actually more enjoyable muted to limit the excessive knife sound effects that are used.

I normally recommend almost every movie I see, but here I need to provide a much narrower recommendation. If you are a fan of amazing fight scenes and want to have a lot of fun in the final epic battle, check out this film, but if you are looking for a story, character development, or great acting… your 75 minutes are probably best invested elsewhere.

Contracts is available from Indiecan Entertainment On Demand on November 10. 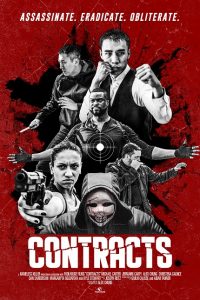 Movie description: Jaded assassin Anthony Lo is tapped on the shoulder by fellow hitman Marc Sullivan, who seeks Anthony's help to find and eliminate a rogue assassin who's picking off Sullivan's crew one by one.