Halloween has happened and that means that, for many, it is officially Christmas season. One of the biggest parts of the holiday seems to be the cheesy Christmas movie. While it is classically associated with Hallmark, others are getting involved, notably Netflix. In this case, writers Jake Horowitz, who also directed, and Andy Lewis have brought us something very different. Cup of Cheer is a classic holiday film with a twist… it is filled with parody and satire. It is a raunchy, late night comedy with a Hallmark movie soul. The opening 3 minutes of the film had my wife and I in stitches, it was incredibly well done.

There are references to Kate & Leopold, Love Actually, Home Alone, and more in this movie that is borderline brilliant. The only thing this movie needed was editors to rein in the writers (or perhaps a director that wasn’t also a writer). Some of the gags go a little long and definitely get into the awkward territory. Picture those scenes in Family Guy where you expect it to be over and it just keeps going and suddenly you realize that the gag lasted too long and you regret it. That happened a few times in Cup of Cheer and I would have loved to have seen that caught and cleaned up. Even with these minor glitches, the film is still a fun watch and we enjoyed it until the end.

One of my favourite parts of the film was the location. The opening scenes were shot in Toronto and I love when I can pick out a location in a movie, it always makes it that much more fun to watch it. Afterward, the film moves to Orillia for the remainder of its filming, which was less interesting as I’ve never been there. The downtown did look beautiful though, which is another thing I love about these types of movies, it often makes me want to visit the places where they are filmed.

This movie does have romantic undertones, but it is quite clearly designed for the laughs and some of the scenes are absolutely hilarious. If you want a film that makes fun of everything you’ve ever found predictable about cheesy holiday films, this is a movie for you. As an added benefit, you can tell your significant other or friend that it’s a classic cheese-fest and watch their reaction.

The film centres around Mary (Storm Steenson) a journalist who visits a small town to cover a story for her publication. When she arrives, she immediately meets and gets off on the wrong foot with Chris (Alexander Oliver). It turns out that Chris may lose his business, a hot cocoa shop, and Mary ends up helping him come up with a plan to save it. The film is filled with a crazy cast of characters including Keith, Chris’s brother, and Authuh (Arthur), a time traveler stuck in modern day. They are both responsible for a number of laughs and make the movie worth checking out.

Cup of Cheer will be available on digital on November 6. 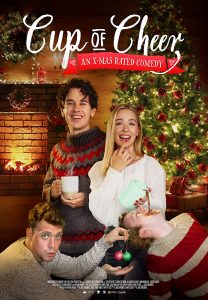 Movie description: Cup of Cheer follows Mary, a big city journalist who heads off to her charming hometown of Snowy Heights to write an article about the town's world famous Christmas cheer. But upon (literally) running into the grumpy but endearing Chris, the owner of Cup of Cheer, Mary learns that his charming hot cocoa shop is going to be shut down on Christmas Eve. And it's her ex boyfriend that's shutting it down. Using her big city smarts and her Christmas cheer, Mary unites the town in an effort to save Cup of Cheer, and to save Christmas.

Moments in Spacetime is a fantastic Canadian film that was on the cusp of greatness. It was well written, well shot, and well acted… it had everything it need for me to want to give […]