I saw Nightshooters as part of the Toronto After Dark Film Festival, but, somehow, did not publish the review. This was a horrible oversight on my part as the film was a lot of fun to watch and quite entertaining.

The film was first released back in 2018, but finally got a Canadian Premiere at Toronto After Dark. The film was picked up in Canada by Indiecan Entertainment, a distribution company that has been growing on me in recent years with a catalogue of amazing films. With Nightshooters, they have made it available on Vimeo on Demand. If you want to check it out, you really can’t beat the price. Also keep an eye on Indiecan, they’ve got a number of good looking films in their coming soon list that I’d love to check out.

With that said, let’s discuss Nightshooters, an action flick that reminds me of the films that I watched with my dad in the 90s. There’s a few things that you need to have to create that authentic 90s nostalgia – a ridiculous premise, an amazing action star, an entertaining ensemble of characters, and an unrealistic outcome. Nightshooters has all of these, so let’s take a look at each of them.

The Premise. Nightshooters is about a movie crew that needs to reshoot a few scenes for their film, so they sneak into an abandoned building scheduled for demolition in order to get their final scenes. It just so happens that at the exact same time, a ruthless gang is using the same buildings to kill some people. Finally, they all just happen to look out the windows at the same time and see each other. I think we’ve got our ridiculous premise.

Next, we need an amazing action star. This requirement is fulfilled by Jean-Paul Ly who plays Donnie in the film. Ly is incredible and it’s surprising to see so little listed on his IMDB page. He’s done stunts on a number of big films – F9: The Fast Saga, Fast & Furious Presents: Hobbs & Shaw, Doctor Strange, The Batman, Venom: Let There Be Carnage. He just hasn’t had a lot of acting roles yet and I think that we should see more out of him because he was highly entertaining to watch. As for the rest of our characters, entertaining is an understatement. From bumbling foot soldiers to over the top henchmen, our criminals seem to cover everything from “I’m just along for the ride” all the way to “I’m a highly trained killer.” At the same time, our film crew is complete with a washed up, alcoholic former star, an armorer with a love for things that go boom, and a sound guy who is just plain entertaining. When they are all put together, the film becomes really enjoyable to watch.

Finally, that leaves us with the outcome and I’m not going to spoil the film. I highly recommend that you give this low-budget indie wonder a try and watch a good ol’ fashioned action flick that is just a lot of fun. I’ve seen bad low-budget action films and this isn’t one of those. This is a good story that is well acted and just a lot of fun to watch. So, if you’re looking for a reason to put butter on popcorn and watch a film, renting this seems like a good excuse.

As mentioned above, this film is available on Vimeo on Demand. 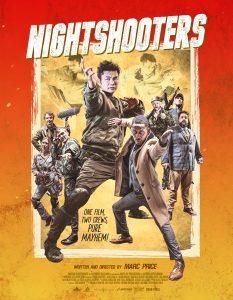 Movie description: Nightshooters is the story of a group of filmmakers illegally shooting a low budget film in an old abandoned office building set for demolition. When they accidentally witness and film a gangland execution in the opposite building, they have to use all their skills and wits to survive the night whilst being relentlessly pursued by the gang who are hell bent on not leaving any witness behind.

The American Dream and Other Fairy Tales is a documentary from Abigail Disney, the granddaughter of Roy Disney (brother of Walt Disney and co-founder of The Walt Disney Company), that looks at the inequality in […]