What is obscene and how do we define it? We are used to acts which are much more obscene, in a way, than small acts like the one that set off the uproar we see in the film.

It is hard to say if this is a film made to entertain, educate, or provide commentary on society, but it successfully does all three. When I read Jude’s words, I can see that come across in the film and I understand exactly what he means. I think, unfortunately, that many may miss the point and fail to see the film as commentary, instead seeing it as just obscenity. The film is, for lack of a better word, fascinating. It is broken down unlike any film I’ve ever seen before and told in three distinct parts, each of which stands alone, but when combined they tell a powerful story.

I thought it would be interesting to read Jude’s origin story for the film before discussing it. How many times have you had a conversation that you felt passionately enough about to want to turn it into a film? I commend him for that because he does pose interesting questions though the film. It is, without a doubt, the most thought-provoking film that I’ve seen in years when considered with his original statement on obscenity.

For the first act, we follow the film’s star Katia Pascariu (Emi) as she walks the streets of Bucharest. I would love the opportunity to speak with Jude to find out how much of this was scripted and how much was just capturing the natural elements of the streets. My hope is that other than Pascariu, everyone was just going about their daily lives and happened to be captured on camera, that would make the scene that unfolds amazing. Unfortunately, I suspect that there are a number of actors in some of the more amusing moments of our opening act. The film captures the sights and sounds of Bucharest and honestly made me want to visit the city. I would have never even thought about that before, but now, should I ever travel to Europe, it would be near the top of my list. I lost myself in this act of the film, caught up in the sights and sounds, enjoying my unexpected view into a place I had never been.

From here, we enter the montage. This is where Jude’s obscenity theme kicks into full gear. The montage provides a series of clips designed to shock and I think they cause a real moment of introspection. We see weapons of war, fascist regimes, and brutal moments in history intermixed with nudity and sexual acts. There is other imagery and a number of historical facts, but I feel these are the two sides of the coin that Jude wants us to focus on. Do you recoil at the sign of children singing fascist songs and marching? Are you shocked by the images of death, starvation, and cruelty on the screen? Or do you flinch and look away when genitals are put on display? My take away from Jude is that we’ve become desensitized to one form of obscenity and, as such, we see the other (sex) as much worse, even though that couldn’t possibly be true. Then again, maybe that was not the writer/director’s intention at all and I’m drawing my own conclusions.

In the final act, we return to Pascariu as she is put on trial by the parents of the children she teaches over whether or not she is fit to teach after a film of her having sex is released on the Internet and seen by her students and their parents. This is horrifying, but also incredibly comedic. It is hard not to laugh at the ridiculousness that is spouted, at the double standards that are implied, and at the craziness of the entire situation. We all know people like the parents portrayed in this scene and we all know that have no business making the claims that they do. They try and act high and mighty, everyone knows the type. It plays out in a way that will have you laughing the entire time. It is a complete reversal of the horrors you experience in the second act or the beauty you see in the streets of Bucharest in the first act. I said I felt like there were five parts and that’s because the director gives us multiple endings baked into the film. Sometimes, you’ll get an alternate ending on a DVD release, but here you get to see alternate endings play out as part of the film and it is brilliant.

At the end of the day, the film is really quite interesting and well worth a watch. I suggest checking it out if you have the opportunity. 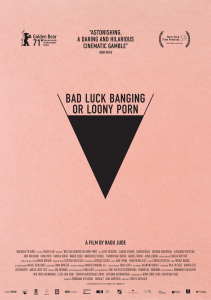 Movie description: Emi, a school teacher, finds her career and reputation under threat after a personal sex tape is leaked on the Internet. Forced to meet the parents demanding her dismissal, Emi refuses to surrender to their pressure. Radu Jude (Aferim!) delivers an incendiary mix of unconventional form, irreverent humor and scathing commentary on hypocrisy and prejudice in our societies.