There were two reasons I was eager to see Daniel Isn’t Real. The first was that Shudder was involved. I’m quite impressed with their films and enjoy watching anything they release. The second was Patrick Schwarzenegger, the son of Arnold Schwarzenegger… I wanted to see if he was as fun to watch in films as his father and, as it turns out, he is.

Daniel Isn’t Real is a very dark and disturbing story. My wife referred to it as “good, but messed up.” I think that’s a rather accurate portrayal. The film follows a young boy, Luke, who walks out of the house while his parents are fighting over his mom’s mental health issues. While wandering around, he witnesses the aftermath of a violent crime and finds himself meeting an imaginary friend, Daniel. After Daniel pushes Luke to do something horrible, Luke locks him away and moves on with his life. Years later, Luke’s psychiatrist recommends that he reconnect with his imagination by reaching out to his imaginary friend, bringing Daniel back into the world. What follows is a wild ride that keeps the viewer entertained.

Both lead actors, Patrick Schwarzenegger and Miles Robbins, bring amazing performances. While I’m not familiar with either of them, I was impressed by how well put together their characters were and how believable they were in every scene. The supporting actors all did a great job as well and while I was disturbed the entire time, I actually enjoyed the film and was really curious to see where it would go. I’ll admit that I was worried that it would disappoint, but it didn’t. It kept me intrigued and interested from start to finish.

I should say upfront: I am an adult who still has stuffed animals that sit comfortably among the decorative skulls and black metal photo books in my house. A friend in college called me “Death Bunny.” And it’s this juxtaposition that probably lead me down the path to making DANIEL ISN’T REAL, a movie all about dueling opposites.

As someone with a theatrical poster of The Breakfast Club, a signed banner of the cast of Degrassi, and a Jason Voorhees mask signed by Ted White hanging side by side, I found this statement very easy to relate to, but more than this, I loved his description of the film and how he wanted to make it.

Yes, we are living in a world whose very fabric is sewn through with evil. Yes, we can’t trust our own senses to tell us the truth. But….
BUT! We can choose to be empathetic.
Suddenly, empathy struck me as rebellious and important. Empathy became the driving idea behind the wild and horrific insanity. I used sound, colors, action, and style to simulate the feeling of a manic breakdown. The terror of an evil from within. But with Miles Robbins playing Luke, we also get the big, messy, beautiful power of compassion.

I love this and it makes me want to watch Adam’s other movies, the already released Some Kind of Hate and the upcoming Archenemy.

Check out Daniel Isn’t Real, in theaters, on demand and on digital now. 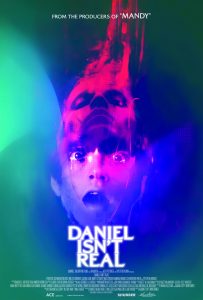 Movie description: Troubled college freshman Luke (Robbins) suffers a violent family trauma and resurrects his childhood imaginary friend Daniel (Schwarzenegger) to help him cope. Charismatic and full of manic energy, Daniel helps Luke to achieve his dreams, before pushing him to the very edge of sanity and into a desperate struggle for control of his mind -- and his soul.