I am not a religious person, but watching All My Puny Sorrows the phrase, “the sins of the father are visited upon the children” popped into my head. The film, based on a novel by Miriam Toews, is about multi-generational suicide. I do not think that suicide is a sin, nor do I think that a suicide always spurs further suicide, but that phrase definitely entered my thoughts while watching the movie. I’m not sure if there’s a point to starting the review with that thought, but it was meaningful to me while I was watching.

I feel like you need to be in a specific mental state to watch All My Puny Sorrows. It is not a film for the faint of heart. I’m also not sure that I would recommend the film to someone currently battling demons. The film follows two sisters – Yoli (Alison Pill) and Elf (Sara Gadon) – who have dealt with a lot in their lives. They were raised in a strict Mennonite sect, their father took his own life, and they are both dealing with very different life situations. Elf is a world-renowned pianist with the appearance of an idyllic life. Yoli, on the other hand, is in the middle of  divorce, raising a teenage daughter, and struggling to write a novel.

The novel, upon which the film is based, is based, in part, on the author’s life. While I won’t write about all of it, I felt it was important to mention because the story is very well developed and absolutely beautiful. It tells a painful story with humour and joy. It is sad, but beautiful. Toews crafted something incredible with her book, which I’ve already added to my Amazon cart to read, and the entire cast came together to bring it to life on screen in a way that Canadian cinema so effortlessly does. If you’re not familiar with Canadian filmmakers, this is a great time to recommend you get to know them. I’ve always felt that Canadian cinema doesn’t get the respect it deserves due to Hollywood sitting right next door. I’m not talking about Hollywood blockbusters made in Canada. I’m talking about truly Canadian films.

If you want to find those films, look no further than the man who directed All My Puny Sorrows and also adapted the story for the big screen. Michael McGowan has produced brilliant Canadian cinema over the years including two of my favourite films that I have watched multiple times – One Week and Score: A Hockey Musical. McGowan hits another home run with this film. There are a couple of his films that I have not seen, but they are now on my list of movies to watch.

The final thing to do here is talk more about the cast. The entire cast was brilliant. Donal Logue is one of my favourite actors, whenever he shows up on screen, I smile knowing I’ll get to see an amazing performance. Both Sarah Gadon and Mare Winningham are recognizable with a long list of credits to their names. Amybeth McNulty has a shorter list of credits but is recognizable from both Anne with an E and, more recently, Stranger Things. Finally, you have Alison Pill, the film’s star. Pill doesn’t need an introduction but if you need a reminder – Scott Pilgrim vs. The World, Midnight in Paris, Goon, To Room with Love, Cooties, and Goon: Last of the Enforcers as well as series like The Newsroom and Star Trek: Picard. She’s been in much more than that, but it is my review, so I get to list my favourites. Pill just makes you smile. When she is on screen, you know that you are getting an amazing performance, she lights it up in a way that few other actors can. In this film, as dark as it is, she still manages to bring light. She is the highlight of every thing she is in and elevates this film in an incredible way.

I’m late to the game with this review – the film was released on May 3 – but I highly recommend checking the movie out when you get the opportunity.

All My Puny Sorrows 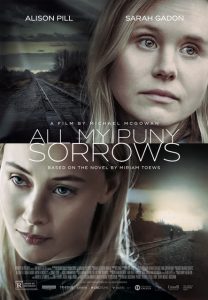 Movie title: All My Puny Sorrows

Movie description: Based on Miriam Toews’ best-selling novel All My Puny Sorrows unexpectedly infuses wry humor into this heart-wrenching story of two loving sisters: one a gifted pianist (Sarah Gadon) obsessed with ending her life the other a struggling writer (Alison Pill) who in wrestling with this decision, makes profound discoveries about herself.