So, let’s get right into that, since I think it was a major sticking point that I had with the film and the thing that most disappointed me. If you read the press kit or caption sheet like I have, or if you simply read the synopsis below or the caption on the image above, you’ll see the film constantly referred to as a thriller. In order to be consistent with the materials, I have labeled it as a thriller, but it was very difficult for me to do that. This isn’t my usual complaint that people don’t understand the difference between horror and thriller. This is a little bit different. This is a matter of not knowing the difference between drama with a bit of tension and thriller. This film falls squarely into the drama category. The tension is minimal and you might lean in once or twice, but you never find yourself on the edge of your seat. The cast and crew do a great job of building to what I’ll call a “thriller moment”, but you never get the payoff, you never get that moment that makes it a thriller. In a thriller, I expect the tension to build until we get to a boiling point and something happens and you find yourself on the edge of your seat, worried about what will come next. That never happens with this film, instead the conclusion simply happens… it peters out.

So, what is Alice, Darling about and how does it become ‘the thriller that almost was?’ Anna Kendrick stars as Alice, a woman in a relationship with Simon, played by Charlie Carrick. From the very beginning, you can tell that something is up with this relationship. Alice is hyperaware of her appearance, her actions, and the feelings of Simon. She walks on eggshells and constantly blames herself. When you put it all together, it is very clear that the relationship is abusive. At this point, it doesn’t appear to be physically abusive, but there is clear emotional and psychological abuse. It becomes clear just how bad that abuse is when she is forced to lie about a work trip in order to leave his side for a get away with her girlfriends.

The abuse is so bad that Alice’s relationships with her best friends – Tess (Kaniehtiio Horn) and Sophie (Wunmi Mosaku) – are clearly strained. While the get away is about celebrating a friend’s birthday, it becomes clear that the goal of the film is to heal Alice. Now that you know about the abuse, the tension in the film builds. What will Simon do? Will he find out she’s lying? Will Alice self-destruct because she is clearly brainwashed by Simon? This does add some minor tension, but it doesn’t create a thriller. At the end of the film, as things fall into place (I’ll avoid spoilers here). You expect to get to horrific moments, you are afraid of what comes next. It never comes. The tension builds slightly and, after spending 90% of the movie asking yourself  when the thriller kicks in, you think it is finally here. Instead the ending is very anticlimactic and you find yourself disappointed.

So, if the ending was anticlimatic and the tension was minor, why did I give the film 4-stars? Two words… Anna Kendrick. I’m a huge fan of this woman – everything she appears in is fantastic and my wife and I go out of our way to watch her entire filmography. She brings everything to her performances and this one was no exception. Her portrayal of Alice is fantastic. It is her performance that generates the tension, that almost makes this a thriller. She takes a clear drama and elevates it with fantastic acting. While the film is enjoyable through the lens of a typical drama, it is Kendrick that makes it a 4-star film.

I would be curious to know if others watch the film and feel that it counts as a thriller. I wondered if part of the problem was my perspective and if this would resonate differently with women, but my editor (and wife) watched the film with me and she also questioned why it was called a thriller. She agreed that it was a great film, but also thought it landed clearly in the drama genre. So, if you check out the film, let me know if you thought it was a thriller.

Alice, Darling was released in theatres on January 20. 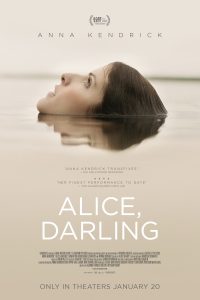 Movie description: In the taut thriller ALICE, DARLING, Oscar® nominee Anna Kendrick (Best Supporting Actress, Up in the Air, 2009) stars as a woman pushed to the breaking point by her psychologically abusive boyfriend, Simon. While on vacation with two close girlfriends, Alice rediscovers the essence of herself and gains some much-needed perspective. Slowly, she starts to fray the cords of codependency that bind her. But Simon’s vengeance is as inevitable as it is shattering – and, once unleashed, it tests Alice’s strength, her courage, and the bonds of her deep-rooted friendships.