Mystery, intrigue, and two of Hollywood’s best leading women – A Simple Favor is full of twists and turns and rather enjoyable to watch. When a hyper-involved mom befriends the “cool” mom of one of her son’s friends, her life changes. The two quickly become best friends, even though they live in completely opposite worlds. Anna Kendrick as Stephanie and Blake Lively as Emily are perfect in these roles. Anna Kendrick, my favourite actress, can play any role and seem genuine and honest, making this role perfect for her… and Blake Lively as the cool, aloof professional was absolutely amazing. The were supported by Henry Golding, who recently killed it in Crazy Rich Asians and delivered an excellent performance in this film.

As Stephanie and Emily grow closer, you start to pick up on a few odd things about Emily, particularly in a scene where she flips out on Stephanie for taking her picture and threatens her if she ever does it again. It’s clear that something is going on, but at this point, you’re not sure what it is. Then, suddenly, Emily disappears and the police are brought in to investigate. At this point, the film becomes a web of twists, turns, and lies. It’s difficult to discuss the film in a review because it has a very Gone Girl vibe to it, and you definitely don’t want the ending spoiled.

What I can say, without spoiling the movie, is that Stephanie turns to the viewers of her vlog to help with finding Emily, getting them to relay information whenever they can, as she becomes quite the detective. This was one of the weak points of the film, as it is with many films that turn to web videos to progress the story. We live in the day of 1Gbps home internet connections and high definition videos, where people make millions of dollars posting videos on YouTube. Yet, films always show video as if it is low quality broadcast over dial-up and with weird glitches that remind me more of growing up with broadcast TV received over an old antennae mounted in my backyard. This really took me out of the experience and it was disappointing to see a modern film attempt to do this.

Seeing is believing with this film and you’ll definitely be left guessing with regard to what is going on and who is involved with what every step of the way. The growth of Stephanie and the intrigue of Emily make this a really interesting character study in addition to being a well written mystery/thriller. There will be a lot of “What?” and “Really?” exclamations while you watch the movie, but it’s definitely worth watching. You should watch it as soon as you can to avoid spoilers because, much like Gone Girl, once it is spoiled, it won’t be nearly as good. 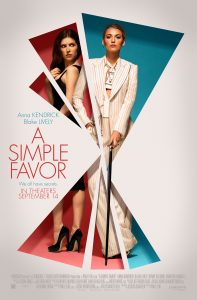 Movie description: A SIMPLE FAVOR, directed by Paul Feig, centers around Stephanie (Anna Kendrick), a mommy vlogger who seeks to uncover the truth behind her best friend Emily's (Blake Lively) sudden disappearance from their small town. Stephanie is joined by Emily's husband Sean (Henry Golding) in this stylish thriller filled with twists and betrayals, secrets and revelations, love and loyalty, murder and revenge.

I recorded the broadcast of this on Sunday night with the intention of watching it on Friday. After watching Twitter blow up with negative reactions, I decided to watch the film sooner. Unfortunately, being Canadian, […]