I wasn’t certain what to expect when I started Paradise PD, an animated series brought to us by Netflix. What I did know was that it included voice work from Sarah Chalke (Scrubs) and Cedric Yarbrough (Speechless) and that was enough to give it a try. The series had its ups and downs, but ultimately ended at a point where I’m eager for the second season to see how it moves forward.

The series centres around a small town police department that is chronically underfunded, which results in the most inept police department around. From the morbidly obese, nice guy to the blood thirsty female cop in love with him and the drug abusing dog to the police officer suffering from PTSD who refuses to leave his vehicle, the fact that the chief is only missing his testicles feels underwhelming by comparison. The police departments new hire is the chief’s son, Kevin, who has always wanted to be a police office and, as he joins the force, a new drug, known as argyle meth, hits the streets. Can this group of under qualified and not-quite-lovable misfits figure out who’s behind this drug before it’s too late?

The standout episode of the series is Meet the Jabowskis, which focuses on Gina Jabowski, voiced by Sarah Chalke. The episode is a self-contained roller coaster that kept me glued to the screen the entire time. If the first episode didn’t sell you on the series, I would suggest you hold out for this episode. Personally, I was on the fence for the first few episodes. I watched an episode a day until I put on Karla, an episode where both the primary and secondary stories are animated comedic perfection. The main story revolves around Kevin and a new talking police car. Picture Knight Rider if Michael Knight had been horny loser and KITT had had a sexy female voice. The secondary story involves Dusty and drug-infused fried chicken, the commentary on our addiction to fast food was not lost on this rotund reviewer. After this episode, I was convinced the series was worthy of a binge and two episodes later, when I watched Meet the Jabowskis, I was convinced that this series might have something special.

I hope they can keep up the pacing of the back half of season one next season and I would think the series could be improved with the removal of Stanley Hopson and Hobocop (although the name was good for a few laughs). All-in-all the freshman season of Paradise PD was good enough that I would watch a second season but it needs some improvement to keep me hooked through the end of season two. 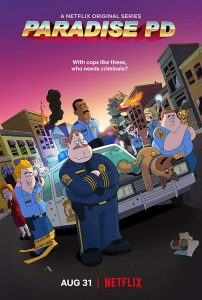 Description: A NSFW animated series about the world's most inept police officers. They make the cast of Police Academy look like world class detectives.