Last year, Netflix hit a Christmas home run by releasing movies with two of my favourite CW stars – The 100‘s Eliza Taylor in Christmas Inheritance and iZombie‘s Rose McIver in A Christmas Prince. So this year, when it was announced that we’d get a sequel to one of those movies, I was overjoyed. A Christmas Prince: The Royal Wedding was the perfect follow-up to A Christmas Prince and, I hope, set the stage to become a trilogy next year.

The film starts by detailing Amber’s (Rose McIver) life as she travels between New York and Aldovia, writing for her website and preparing for her wedding. One of the first things I took notice of in the film was the recasting of Amber’s father, Rudy (John Guerrasio). I may not have noticed, if it wasn’t called out by Princess Emily (Honor Kneafsey) in the film, when she says, “I thought he had a goatee.” This prompted me to quickly look at IMDB and confirm that it was indeed a different actor. I appreciate when TV shows and films call out casting changes with these minor nods.

The film has two stories, both involving Amber. On one front, she’s battling tradition as she prepares for her wedding, learning that she may not have as much control as the thought she had. It is in this plot line that we find the most annoying aspect of the film, wedding planner Sahil (Raj Bajaj). The introduction and initial scene with this character almost caused me to turn the film off. In fact, his existence is why I knocked this film down from 4 stars to 3.5 stars. Amber has no input into her own wedding. While this wouldn’t bother me, I suspect that my wife would have been unhappy if every moment of our wedding and its planning was dictated to her.

The second plot line focuses on Prince Richard’s (Ben Lamb) modernization plans, which have caused economic turmoil in Aldovia. Here, Amber wants to help, but her offers and opinions are cast aside. While Richard struggles, Amber teams up with her friends from New York and Princess Emily to work behind the scenes and determine what is happening. It is here that we get the most cringe-worthy scene in the film as Princess Emily demonstrates her hacking “prowess” – should Netflix require a consultant to add realism to future hacking scenes… I’m more than willing to help.

A couple of subplots that were entertaining involved the return of Simon (Theo Devaney) and the interactions between Rudy and Chef Ivana (Katarina Cas). Both were heart-warming for different reasons and added layers upon layers to the film. This was one of the more surprising aspects of the film. While most romcoms are rather flat and one-dimensional, this movie was layered with a number of irons in the fire. I enjoyed everything that was going on and how it all tied together. There were definitely a few twists and turns that made this more interesting than the average romcom. 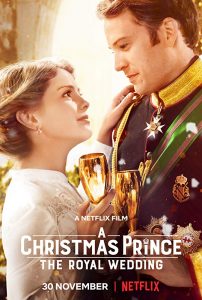 Movie description: A year after Amber helped Richard secure the crown, the two are set to tie the knot in a royal Christmas wedding - but their plans are jeopardized when Amber finds herself second-guessing whether or not she's cut out to be queen, and Richard is faced with a political crisis that threatens to tarnish not only the holiday season, but the future of the kingdom.

When I look at movies, there are things that will often make me do a double take. For example, when I first heard that Simon Pegg would play Scotty in the Star Trek reboot, I […]