When I watched The Equalizer in 2014, my first thought was, “I can’t wait for a sequel.” If you are unaware, the film series is a reboot of the 1985 TV series of the same name. In the age of rebooted TV series, I’m surprised this one hasn’t surfaced – although I wouldn’t be surprised if Peter M. Lenkov (Hawaii Five-O, MacGyver, and Magnum P.I.) isn’t working on a reboot. The first film introduced a new generation (myself included, since I was 3 when the TV series aired) to Robert McCall (Denzel Washington), a mysterious loner who feels the urge to help others “equalize” their situations. The Equalizer 2 picks up with McCall doing more of the same and gives us more character development than I feel we got from the first film.

The film throws McCall straight into a “do-gooder” situation – recovering a kidnapped child. If, like my wife, you are jumping into this movie without having seen the first one, you should probably step back and watch the original. She did, however, enjoy this movie without seeing the 2014 film, but I did have to pause a few times to catch her up on what was going on and who specific characters were. This introduction serves primarily as a reminder that McCall is a bad-ass. We also learn early on that McCall is a Lyft driver (which the film comes back to later) and that he’s helping Sam (Orson Bean), a resident of a retirement home who was separated from his sister during World War II. None of this is central to the main story line, but it helps demonstrate the type of man Robert McCall is.

This film’s primary story centres around the murder of McCall’s friend Susan Plummer (Melissa Leo). She was overseas to investigate a murder when she was killed and it’s immediately clear that something fishy is going on. Meanwhile, McCall is working with his neighbour, Miles (Ashton Sanders) to teach him responsibility and keep him out of gang life. While this subplot didn’t tie into the primary story line initially, I enjoyed the interactions between McCall and Miles during the first act of the movie, they added a few light scenes that did a great job of cutting up the action. As McCall digs into Susan’s murder, he reveals that he is alive to his former partner, Dave York (Pedro Pascal), who works to help him find the murderer and gain access to information that he needs.

The film is, however, ultimately a story of betrayal and we finish the movie with one of greatest gun battles in recent years. In a small coastal town, evacuated due to an incoming hurricane, McCall goes up against former friends and teammates in the ultimate showdown. One of my favourite moments involved the use of a dust explosion. In the end, McCall saves the day.

The film is definitely worth a watch, anything with Denzel is worth watching. Over the past few weeks, I’ve watched a few action flicks and the quality of The Equalizer 2 has meant lower ratings for the other films as they just did’t quite stand up to this one. 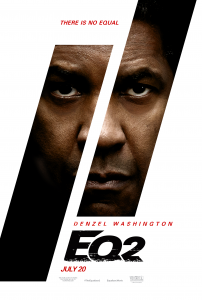 Movie description: Robert McCall has rededicated his life to the pursuit of justice. But when his mission strikes close to home, he will be consumed by vengeance, seeking a revenge that knows no boundaries.

Jaw dropping. That sums this film up quite nicely. This movie is an electrifying wild ride from the opening scene with the awful CGI jet. I can honestly say that the horrible CGI in the […]