What can I say about this film, you get another classically cute film from a popular Netflix series. This was probably the weakest showing of the three, but it still had all the magic of the other two films. In this episode of the film series, we see that Queen Amber (McIver) is still working to modernize Aldovia, this time with a treaty that maintains a centuries old truce between their kingdom and their neighbour Penglia. She pushes for the queens to also sign the treaty, something that Queen Ming (Momo Yeung) of Penglia is reluctant to do. The film mixes Queen Amber’s pregnancy with a mystery as the treaty is stolen and may not be signed before the deadline. If the deadline is missed, the two friendly nations return to a state of war.

This film, like the others, is stolen by Honor Kneafsey as Princess Emily. Kneafsey is a brilliant actor that steals every scene she is in and just makes the movie more fun. She isn’t the only amazing actor in the film, as all of the regulars from the first two films show up again in this one. Kevin Shen and Momo Yeung are great additions to the film as King Tai and Queen Ming of Penglia.

One of my favourite things about these films is the trivia Netflix includes in the production notes. I love to check the trivia and see if I caught any of the throwbacks they put in. One that stood out to me immediately, that I was glad to see acknowledged, was the nod to The Princess Bride (one of all-time favourite films) when Mr. Little (Richard Ashton) says, “as you wish” to Princess Emily. The other one, which I didn’t catch while watching the film, was that the maps which show Aldovia and Penglia also show Belgravia, the kingdom from The Princess Switch.

I would say that this third film in the series is the weakest showing of the bunch. Not that it is bad, I really enjoyed myself, it just isn’t as good. While I would say the first two films were far better than a typical Hallmark-style Christmas movie, this film was closer to being on par. It resorted to a number of moments that are normally reserved for the cheesier films, like when  Princess Emily and Queen Helena go down to the dungeon alone… that simply did not make sense. There were other moments like this, particularly involving the identity of the thief. I felt like the villain didn’t fit the movie and there were better options from past films (or even this film) to fill that role.

If, like me, you missed this film… it is worth a watch. If you’ve already seen it, well… it’s the holiday season, watch it again.

A Christmas Prince: The Royal Baby was released on Netflix in 2019. 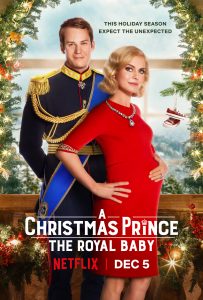 Movie description: It’s Christmastime in Aldovia - and a royal baby is on the way! Amber and Richard host royals from a faraway kingdom to renew an ancient truce, but when the priceless 600-year-old-treaty disappears, peace is put in jeopardy and an ancient curse threatens their family!

While this was on Hulu in the United States, it was a rental up here in Canada. My wife and I watched it this weekend and we were quite entertained. The film is not your […]