When the original Wrong Turn film was released, I was just finishing my first year of college.  The previous year, I had watched The Grudge and The Ring and learned that horror movies were not the fun films that I had grown up on… the slasher flicks – Friday the 13th, Child’s Play, Nightmare on Elm Street, and Scream – were gone and I wasn’t a fan of the new horror style. I walked away from horror movies and only went back a few years ago, around the time I started this site. That means that I never saw Wrong Turn and, as such, went into the reboot of the franchise with no expectations.

I can’t say if that was a positive or a negative, but I did enjoy the film. I’m not sure that I fully place it in the horror column though. The movie felt, other than a few scenes, more like a thriller. Which isn’t a bad thing… my wife, who hates horror movies, was going to leave the room while I watched the movie… but she ended up watching it and, when she got up for a moment, even asked me to pause it. It was well done and entertaining with only a couple of (mild) jump scares and a bit of gore to try and limp into the horror category.

We wanted to make a movie that reflects the state of the mind of the world today. I think as people we are all capable of being the most extreme versions of ourselves so when those extremes collide one person’s dream can become another person’s nightmare.

The film, for those unfamiliar, tells the tale of a group of 20-somethings who have very 20-something attitudes. They head out to hike part of the Appalachian trail and wander off the path, against the advice they were given, and find themselves in a desperate situation. They wind up on the lands of The Foundation, a society founded prior to the civil war with the intention of being the foundation of American when the dust of the civil war cleared. The Foundation is not against doing whatever it takes to keep their way of life secret and protected. What I found most interesting about the film was the fact that there were really no likeable characters in the film. The group of 20-somethings have many of the qualities that drive the rest of the planet crazy – they have a ridiculous level of self-entitlement and are completely self-absorbed… they’re also cocky beyond belief. The Foundation kills people to protect their secret. It’s hard to say which is worse.

The primary point of view for the film comes from Jen (Charlotte Vega), one of the 20-somethings, and her father, Scott (Matthew Modine). You would expect that one of them would provide an anchor, but they don’t. While Scott is focused on finding his missing daughter, he makes mistake after mistake… sometimes you find yourself yelling at the screen. One thing is clear, he’s not great with firearms… try and watch the movie and not yell at him during scenes involving firearms. Jen, on the other hand, makes some bad choices that make her hard to like at times, but she is, for the most part, the closest thing the film has to a likeable character.

Jen in particular is a character that I think will resonate long after the credits roll — wonderfully flawed, determined character that will do whatever it takes to survive.

I think the coolest thing about the film is how it betrayed my expectations. I was expecting to watch the butcher of a group of young people at the hands of country dwelling rednecks. That wasn’t the movie I saw. What I saw was a really enjoyable, really fun horror/thriller (you know that meshing of genres that I claim to dislike). I thought the ending was brilliant and the music over the end of the film heightened it in unexpected ways. The film closes with Ruby Modine (daughter of Matthew Modine) singing a hauntingly beautiful rendition of This Land is Your Land.

But most importantly we wanted to make a movie that surprises audiences. They think the movie is going one way and we take them down a completely other turn. This is a movie where the audience will think they know who these characters are and we’ll completely flip that prejudice on its head. These characters keep surprising us which makes the movie so special.

Saban Films will release the horror film On Demand, Digital, Blu-ray and DVD on February 23, 2021. 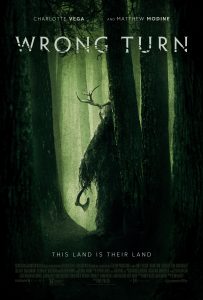 Movie description: Backwoods terror and never-jangling suspense meet when Jen (Charlotte Vega) and a group of friends set out to hike the Appalachian Trail. Despite warnings to stick to the trail, the hikers stray off course—and cross into land inhabited by The Foundation, a hidden community of mountain dwellers who use deadly means to protect their way of life. Suddenly under siege, Jen and her friends seem headed to the point of no return— unless Jen’s father (Golden Globe® nominee Matthew Modine) can reach them in time.