Zombies have been extremely popular for more than a decade now and pretty much every type of zombie flick you can think of has been made. Deadsight happens to have found a gap in the A-Z of zombie films and filled it, you probably haven’t seen a film before about a pregnant cop (Liv Collins) and a blind man in handcuffs (Adam Seybold). I will say, up front, that my biggest disappointment with this film is the zombie on the DVD cover, it sets the bar pretty high for the zombies in the film, but they simply don’t look as scary as ‘DVD Cover Zombie’. The film itself relies heavily on jump scares, lighting, and music to inspire fear. I wouldn’t call it a scary movie, most of the jump scares are predictable due to the music queues, but it’s a creepy film that uses music and lighting to keep tensions high. It works for the most part because this is a low budget zombie flick and you know what you’re getting going into it, however I could have used a little more scare or a little more story, either one would have lifted this from a decent flick to a great movie. The movie is sure to be a hit at horror film festivals and with zombie lovers, but I’m not sure it will gain mainstream popularity.

Liv Collins plays the main character (she also co-wrote the film along side Kevin Revie), a cop named Mara Madigan who is about to go on maternity leave. Collins is a decent actor, something you don’t often see in some of these lower budget horror flicks, but her character doesn’t feel complete. She’s a police office but seems to be afraid of her own shadow, she’s also a horrible shot, it feels like she’s never handled a gun before. The other character in the film, Ben Neilson, is played by Adam Seybold, another decent actor. We meet Ben as he wakes up handcuffed to a stretcher in the back of an ambulance (specifically a MedEvac Canada ground transfer vehicle – we get a nice slow pan across the URL on the side of the ambulance at once point). Ben doesn’t give us a lot of background information, but he’s mostly blind and has this little unlabelled vial of drops that seem to help him. The consistency of Ben’s blindness seems to vary throughout the film. At times, he can barely walk forward, at other times he can perform complex tasks and find specific locations without much effort. The two actors pair well together on screen, unfortunately they spend much of the film apart.

There are a few interesting reveals and few points that show us the humanity of the characters that provide somewhat touching moments in an otherwise bleak world, but it isn’t enough that I would tell a non-horror fan to check out this film. I couldn’t see myself recommending this to my wife or my mother. I do have a few friends, however, that I think would enjoy the movie. I suspect that when film makers create a film like this, they realize that they’re creating a niche film that caters to a subset of the movie watching world. That subset will enjoy this film. It’s a decent 80 minute distraction from real life with some entertaining moments and an interesting story. What I would like, however, is more of the story. I think that Deadsight could benefit from a movie that explains the outbreak we’re seeing (the prequel) and a movie that explains what happens next (the sequel), I’d also like to see a comic book companion to this film. I think that a 6 run limited series horror comic could really expand on the world that Deadsight creates.

The movie is available now on DVD and on demand. If you’re a fan of zombie films, you should definitely check this out. 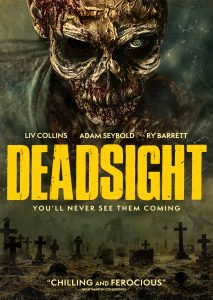 Movie description: In DEADSIGHT, Mara Madigan (Liv Collins) is a pregnant police officer about to go on maternity leave. But on her last day on the job, she wakes up to a world ravaged by a nightmarish and bloody plague of the living dead. Amidst the chaos and violence, she finds Ben Neilson (Adam Seybold), a man who is virtually blind, helpless, and has a mystery shrouding his past. Somehow these two must put their heads together and find a way to safety to escape this living hell.

Last year, Disney knocked Christmas out of the park with Noelle. I’m not going to say that they beat themselves with this year’s release of Godmothered, but they definitely came close… it’s another home run […]