I was 9 years old when the biospherians entered Biosphere 2 and I was 11 when they came back out. I remember hearing about the Biosphere, but I couldn’t have told you much about it. I made the assumption that it was some government or university project and didn’t really think much about it. So when I saw the trailer for Spaceship Earth, I knew that I had to watch it. In addition to covering an interesting topic, the idea of living inside a confined space with others for an extended period of time seemed all too realistic right now, which director Matt Wolf touched on as well in his director’s statement.

While making this film, I never could have imagined that a pandemic would require the entire world to be quarantined. Like all of us today, the biospherians lived confined inside, and they managed day to day life with limited resources, often under great interpersonal stress. But when they re-entered the world, they were forever transformed—no longer would they take anything for granted—not even a breath. In light of Covid-19, we are all living like biospherians, and we too will reenter a new world. The question is how will we be transformed? Now with a visceral sense of the fragility of our world, it’s on us to protect it.

Luckily for us, those involved with the Biosphere 2 documented everything. Between video and photographs shot by those behind the project and the video diaries of Roy Walford, one of the biospherians, director Matt Wolf had more than 600 hours of archival footage available. They realized what they were doing was important and documented everything. That means that we get an incredible look inside not only the Biosphere 2 itself but the more than 20 year lead-up that culminated in the Biosphere 2 project.

This documentary looks at the lives of the biospherians – Jane Poynter, Linda Leigh, Mark Van Thillo, Taber MacCallum, Roy Walford, Mark Nelson, Sally Silverstone, and Abigail Alling – but it also looks at the lives of the people behind it and how they got to the point of creating Biosphere 2. It is an incredible story, one that can only be described as stranger than fiction.

At this point, anything else I discuss could be considered a spoiler (although it’s all documented history). If you want to be surprised watching the film, know that I highly recommend this documentary and think everyone should see it at least once and stop reading here. If you want to know more about the details of the film, keep reading.

The documentary starts 25 years before Biosphere 2 with Marie Harding and Kathelin Gray discussing their meeting of John Allen in the 1960s. John Allen is the mind behind Biosphere 2, but, long before that, he was involved in numerous other projects. They were founding members of the Theater of All Possibilities in San Francisco and performed shows there for a while before moving to New Mexico and starting up the Synergia Ranch. The group has been described as a collective, a commune, a counterculture community, and a cult. As I watched the film, all I could think is that they were hippies doing what made them happy, but it definitely felt “cult-ish”.

The group was filled with a desire to continually create and a group of them moved to Berkeley where they decided to build an ocean worthy ship, specifically a Chinese junk named Heraclitus. This was a group of hippies who had started with the arts in San Francisco before moving to ranching in New Mexico, who were now back in California building a boat, something they had no experience with. While not covered in the documentary, I was amazed by this and did some digging – the boat went on 12 expeditions over 40 years covering 270,000 nautical miles. As part of this work, the group founded the Institute of Ecotechnics, which still operates today. The institute is responsible for a gallery in London, a ranch in Australia, rain forest in Puerto Rico and more.

At this point, you’re wondering how did a theatre troupe accomplish all of this and how did they pay for it. The fact that they accomplished this is simply a testament to how amazing these individuals were. The money… that came from Ed Bass, whose family wealth came from oil. I thought this was an ironic part of the group’s history that wasn’t really touched on… a group of individuals concerned with the environment, funded by someone that came from oil money. The group setup various businesses, where Bass would purchase something (like the gallery, ranch, and rain forest mentioned above) and they would improve upon it so that he could turn a profit and, in turn, they would profit.

All of this is just background to get us to the realization that this is the group responsible for Biosphere 2, a $200 million project. It’s absolutely crazy to think about how a theatre troupe living in 1960s San Francisco became the driving force and executive team behind Biosphere 2. The two year project that saw 8 individuals locked inside this self-sustaining environment was a divisive topic within the scientific community at the time and terms like “cult” were definitely used by the media more than once. John Allen, who was clearly a genius, became the centre of attention and it was’t all positive. At this point, the documentary covers what went wrong, what went right, and how it the experiment concluded. The only way that I can describe the situation is mind-blowing. Then, when you think it can’t get any crazier a name from today makes an appearance… Steve Bannon. At this point, the story is one you have to see to believe and I thank Matt Wolf for sharing it with us.

The documentary is available everywhere on May 8 and I recommend booking a block of time Friday night to sit down and watch it. You’ll see a group of passionate people who identified the current global climate crisis long before anyone else was talking about it, who accomplished more than anyone should have expected them to. It’s a crazy story, an inspiring story, and a highly entertaining story… one that I wish I could watch again for the first time. 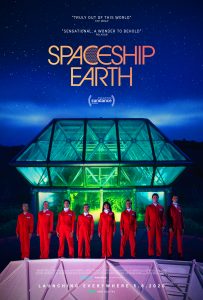 Movie description: Spaceship Earth is the true, stranger-than-fiction, adventure of eight visionaries who in 1991 spent two years quarantined inside of a self-engineered replica of Earth’s ecosystem called BIOSPHERE 2. The experiment was a worldwide phenomenon, chronicling daily existence in the face of life threatening ecological disaster and a growing criticism that it was nothing more than a cult. The bizarre story is both a cautionary tale and a hopeful lesson of how a small group of dreamers can potentially reimagine a new world.