What do you call a 5-star film with a 2-star ending? Save Yourselves!

The film started off a little slow and I was worried that the cast wouldn’t be able to carry the movie. After about 10 minutes, Sunita Mani and John Reynolds, the film’s stars, proved me wrong. The concept of this movie was so brilliant, that I actually reached out and requested a screener, something I rarely do. Unfortunately, the film has a critical flaw… the conclusion. Doubly unfortunately, it’s difficult to talk about a film’s conclusion without spoilers, but I’ll do my best.

The film starts out with a 30-something, technology obsessed couple. It is cute and quirky, but they are the type of self-obsessed millennials that everyone loves to hate. One scene that sums up the type of people they are so brilliantly is the scene where they decide to disconnect and go out to a cottage for a few days. They decide on the weekend and Su (Sunita Mani) calls to inform her boss that she won’t be in to work that week. She proceeds to get fired and is devastated by the news. I’m honestly not sure how this was surprising… everyone knows that you book long vacations at least a couple of weeks in advance. I feel like the firing was completely justified and the reaction of Su and Jack (John Reynolds) is very telling of their characters.

The concept of the film is equal parts simplicity and brilliance. In order to disconnect and rediscover their relationship, Su and Jack head to a friends cottage in the bush for a week. As they are both technology addicts, they agree to go offline for the week. It seems like a great, simple way to reconnect. Neither if them are suited for life outside the big city, but at least they are trying to make it work. The only problem with disconnecting completely is that there’s no notification available to let you know when horrific events have occurred. Had they been closer to normalcy and further from “nightmare millennials that you read about on the Internet”, things may have gone differently. Instead, they assumed that multiple gunshots were hunters (with no clue as to whether or not it was hunting season).

Since they cut themselves off from the world (even though they had no place existing in a world outside of downtown Manhattan), they had no idea that an alien invasion was happening. So, now you have two mindless, idiotic millennials living a carefree life in the middle of nowhere, blissfully unaware of what is happening not far away. They may have questioned those gunshots had they paid just a bit more attention or given it just a bit more thought. The movie continues on with more and more completely stupid decisions. From their grocery lists to their opinions on guns, they are everything that the world hates about millennials presented in such a way that you laugh and cry at how much of the real world is conveyed in their decision making process. Future generations may look back and assume that they are caricatures of millennials, but present day viewers will know that this is exactly how the majority of the “me first” generation behaves.

So, while you laugh and cry at the fact that these people actually exist, you actually get a decent comedy / sci-fi flick. It wouldn’t play out nearly as well with capable individuals, so you’re glad they went with city-dwelling millennials… it’s stupid, but believable. So, you yell at the screen, but you are sucked in… completely enjoying the movie or at least the suffering the protagonists are enduring. The film is also filmed with well done visual effects, especially for a low budget film. The aliens are well done, the gags are impeccable, everything comes together in an amazing way and I was incredibly impressed.

Then something happens. I won’t discuss what it is, but it’s the conclusion of the film. After reading the director’s statement and production notes, I think that I might have an inkling of what they were trying to accomplish, but I can’t be certain. If it was their goal, they took an amazing film and ruined it by trying to suddenly be philosophical. If it wasn’t, then they just ran out of ideas and created a horrible ending. The ending is too open ended. When you have an amazing Sci-Fi film, you want a solid ending. You want a conclusion. Too many filmmakers these days have forgotten that they are story tellers, not philosophers. They don’t want to anger any single set of fans, so they avoid conclusions and let the viewer decide. I don’t want to decide… I want to be told a complete story and while I LOVED this film, I didn’t feel I was given the conclusion I deserved for the time I had invested. I also don’t think the film was given the conclusion it deserved. It was so well done. The characters were written to be everything you hate about their generation, the cast portrayed those characters perfectly, and the story was incredibly interesting. The direction, the visual effects, even the music was all spot on. The ending, however, was disappointing. It actually might be the most disappointing conclusion to a film this year.

I would love to see the filmmakers revisit this and add an additional 5-10 minutes of content to give us a real conclusion, an actually summation to the story. I doubt it will happen and for that reason a 5-star film with a 2-star conclusion can’t rate higher than 3.5-stars.

I recommend seeing this… for the majority of the time you are watching it, you’ll love it. Just keep in mind that the ending is disappointing.

Save Yourselves! will be shown in theatres on October 2 and be available on demand on October 6. 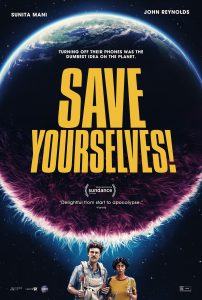 Movie title: Save Yourselves!

Movie description: Jack (John Reynolds) and Su (Sunita Mani) are a hip Brooklyn couple who, like many of their friends, find themselves dependent on technology and unable to put down their phones. Fearing their mindless scrolling may impact their connection with each other, they seize the chance to head to an isolated cabin in the woods, vowing to unplug from the outside world for a week. Sheltered from texts and push notifications, they are blissfully unaware that the planet is under attack. As strange events unfold, the couple must figure out a way back to civilization—or what’s left of it.

Sometimes you come across a movie that you want to watch two or three times to ensure that you fully understand it. I watched the movie and I wondered if I was really prepared to […]

I wasn’t sure what to expect when I sat down to watch a 2 hour film called The Marijuana Conspiracy that takes place in Toronto in 1972, particularly one based on a true story. The film […]