One of my favourite TV series was Lie to Me. It was such a fun twist on a police / legal procedural, primarily because it wasn’t a police / legal procedural but it followed the same building blocks. That series made Tim Roth one of my favourite actors. The way he carried himself and delivered his lines was unique and brought additional depth to the character. As a result, I actively seek out and watch anything he is involved with. That’s why I was so excited for Sundown.

What I got was not what I expected. To say that the film is a slow burn would be an understatement. That is almost impressive when you consider that the film has a running time of only 83 minutes. That could be a single episode of a “hour long show” on a streaming service. The story covers a lot of ground in that time, but we are left to fill in a lot of the characters inner dialogue ourselves. There were a few scenes where I would have enjoyed knowing what Roth’s character was thinking rather than guessing. In many ways, this felt like a “Choose Your Own Adventure” type story, but regardless of your choice, a linear story progressed.

I wrote the movie in the middle of a deep personal crisis. I was questioning where I am in personal aspects of my life, and for the first time I started to think that life isn’t infinite, and there’s an end to things. This happened after a trip I made to Acapulco, with a girlfriend, and as we drove from the hotel at 8pm for dinner, I was stopped at gunpoint by some federal policemen in a very aggressive way. They were wondering if my girlfriend was in danger — if she was with me against her will. They wanted me to get out of the vehicle. I knew it was the last thing I should do. My girlfriend didn’t understand what was happening, she told me to do as they say. I managed to get out of the situation by driving away, and they followed us, and threatened us, but we made it safely back to the hotel. This made me sad because Acapulco is one of my favorite places.

Reading Franco’s words really changed my take on the film and I feel that you need that understanding of what was going through his head when he wrote the film to make up for the lack of dialogue. Looking back on the film with this in my head actually changes my take on the film. I had originally given this 2-stars, but bumped it to 3-stars after reading those words.

The film looks at Roth’s character, Neil, as his life is falling apart and he experiences a midlife crisis. However, the nature of that crisis changes depending on when you come to a realization, one that I will share with you now to avoid any confusion. The film starts with (based on the synopsis) Neil and Alice Bennett (Charlotte Gainsbourg) on vacation in Mexico. I was convinced for a decent portion of the film that they were a married couple and, as such, Neil’s choices struck me as cruel and disrespectful. Instead, however, they are siblings and that completely changes the context of the story and the understanding of Roth’s character and his initial choices. I don’t know if I missed an early indicator of this or if it wasn’t actually disclosed until halfway through the film, but it completely changes the lens with which you see the film. It definitely hurt the film in my eyes that I didn’t catch on to that fact earlier.

Instead of a story about a cruel man that you find yourself disliking, the film is the story of how we all deal with pain and grief differently and how that grief can break bonds and ruin lives. It was, in fact, fascinating upon further thought and I hope that I get the opportunity to rent the film and watch it again without the cloud of anger that my misunderstanding caused.

My only real complaint at this point, preventing me from bumping this again to a 4-star film, is the lack of a real conclusion. The film just drifts off in my eyes without any real payoff for sticking it out. Adding 7 more minutes of running time, making it an even 90-minutes and using those 7 minutes to provide some form of closure for Neil would have been a nice touch and would have, in my opinion, greatly improved the story.

Sundown will be available in select theaters on January 28. 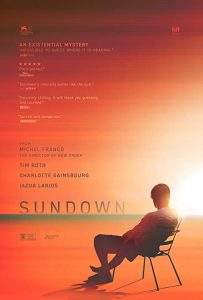 Movie description: Neil and Alice Bennett (Tim Roth, Charlotte Gainsbourg) are the core of a wealthy family on vacation in Mexico with younger members Colin and Alexa (Samuel Bottomley, Albertine Kotting McMillan) until a distant emergency cuts their trip short. When one relative disrupts the family’s tight-knit order, simmering tensions rise to the fore in this suspenseful jolt from writer/director Michel Franco.