My wife and I finally sat down and watched Bo Burnham’s Eighth Grade starring Elsie Fisher. Admittedly, we’re not the target demographic for this film, being in our mid thirties, but we enjoyed the movie. It was definitely hard to relate to some of the scenes, my wife looked at me a few times to ask, “Is that really what kids are like these days? Mindless drones with their faces stuck in their phones?” Unfortunately, I didn’t have a good answer, but given that the movie has been called true to reality and genuine in many reviews, I feel like perhaps kids need their phones taken away from them. Then again, I’m not a parent and that’s not what I’m writing about. Back to the movie, Bo Burnham created something amazing, but I feel like it has a target audience and doesn’t resonate as well outside of that audience. What does that mean? Bo Burnham isn’t the next John Hughes, this movie wasn’t The Breakfast Club or Ferris Bueller’s Day Off. That said, it is more grounded in reality and a great movie. I’ve found lately that first time directors are knocking it out of the park, and Burnham is no exception.

The movie stars Elsie Fisher, who reminded us of Emma Stone, as awkward introvert Kayla Day. She makes YouTube videos and interacts with others on social media, but face to face interaction is not one of her strengths. We follow her life during her last week of middle school, which involves a birthday/pool party, a visit to her soon-to-be high school, an outing to the mall, and other typical eighth grade experiences. Fisher is amazing in her performance and it was great to see the role filled by an actor close to the age of the character, rather than the typical 20 year old trying to look much younger. Kayla is an interesting character with her own highs and lows, all underlined by an ongoing awkwardness that occasionally makes the viewer uncomfortable. I couldn’t understand if the viewer was supposed to like to Kayla or not (again, probably because I’m not the target demo), but I had a hard time feeling sympathy toward the character watching her initial interactions with her father (played by Josh Hamilton) over dinner. If I had ever treated my parents like that I probably would have been smacked or sent to my room.

Hamilton was another strong point in the film. My wife commented on how his “speeches” came across as sincere and honest, they didn’t have the polish that most movie fathers tends to have. He came across as a single parent struggling to stay connected to his daughter as she distances herself. He was worried and unsure of where his place was. To me, it was a completely honest and realistic portrayal.

The movie does have a few dark moments, thankfully not as dark as they could have been. They are handled well and while they inspired my wife to yell at the TV, they avoided crossing the point of no return. There’s a fine balance between comedy (which is amazingly done and presented at just the right time) and drama that keeps you interested in the movie. Even though I couldn’t relate to everything I was seeing, I still saw familiar scenes that brought me back to that age more than 20 years ago. So, the movie can speak to everyone, making it a movie that will likely stand the test of time and one that I’ve added to my movie collection. If you haven’t seen it, it’s worth checking out and, while it has an R rating, if I had kids, I’d want them to see it. 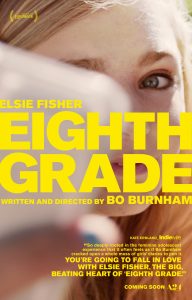