I’ll say it right off the bat… you need to give The Virtuoso a chance before you turn it off. I almost abandoned the film because the majority of the film is just Anson Mount having a conversation in his head. It wasn’t really my cup of tea, but, by the end of the film, I felt like it was a natural part of the process.

The film doesn’t really do names, the characters are concepts. You have The Virtuoso (Mount), The Waitress (Cornish), and The Mentor (Hopkins). The Virtuoso is a hitman who is good at what he does until he’s not. After a hit goes wrong, The Virtuoso is off his game, but The Mentor gives him another job to clear his head. The information is vague and the timeline is rushed, but The Virtuoso moves ahead with it. When he arrives at the destination, he encounters The Waitress, whom he first met on the trip to his destination. To say that he is smitten is an understatement.

Since The Virtuoso has such limited information, he begins the search to identify his target. This is where things get to be interesting as it appears that people might not be who they say they are and the entire mission is confusing and feels out of place. While the story is decent, it’s the intrigue that keeps you watching.

THE VIRTUOSO is a modern day film noir, filled with intricacy and ambiguity… a visceral thrill ride with something to say. It contains everything I love in a movie. There is cinematic style to burn: bold visuals, muted colors, strong performances, dynamic compositions and Hitchcockian suspense mixed with Peckinpah violence. But it’s also filled with compelling and unconventional characters. A clever and gripping story told in an unorthodox manner. And a riveting plot filled with moral dilemmas and heartbreaking realities.

On a deeper level, the film explores universal themes of identity, guilt and redemption. It examines the fine line between appearance versus reality and fate versus free will… and the horrific cost of them all. As timely today as when the genre was at its peak in the late Forties and Fifties, I want THE VIRTUOSO to be a cinematic hammer to the head and the heart. Filled with jaw-dropping violence, nail-biting suspense and dazzling style… anguished, beautiful and desperately alive.

As I read the director’s statement, I realized part of the issue. Stagliano is rather full of himself. This level of ego is incredible. If I spoke this way about my own creation, I’d be laughed out of the room, the company, and the industry. This guy, however, does it with a straight face.

So, here’s the reality. The film gives you a decent story with a nice bit of intrigue and an attempt at a twist ending that you’ll likely see coming by the mid-point of the film (if not sooner). The acting is great, especially Mount and Cornish. Pairing them up is probably the most genius aspect of the film. Hopkins is always a treasure and he was a joy to watch in his scenes. I also really enjoyed his character.

There are definitely moments where you have to suspend disbelief, which is odd given that the film is a thriller and not a crazy Sci-Fi flick. There are other moments where you see what is happening and wonder how this guy (Mount) has the moniker The Virtuoso, then you remember the hubris of the director and it all makes sense.

I think this movie had everything it needed to be awesome. There were poor stylistic choices made that distracted from parts of the story, but, for the most part, it was enjoyable. Watch closely with some of the gunfire scenes, those were the scenes that I’m not entirely convinced were realistic. A few less lines of voice over, some fixes to the fight scenes, and about a 15-minute runtime reduction would have made this a 4 or 4.5-star film.

Lionsgate will release The Virtuoso in select theatres and everywhere you rent movies on April 30. 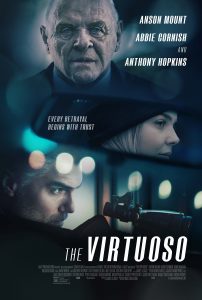 Movie description: Danger, deception, and murder descend upon a sleepy country town when a professional assassin (Anson Mount) accepts a new assignment from his enigmatic mentor and boss (Oscar® winner Anthony Hopkins). Given only where and when along with a cryptic clue, the methodical hit man must identify his mysterious mark from among several possible targets, including a local sheriff (David Morse). Meanwhile, a chance encounter with an alluring woman (Abbie Cornish) at the town’s rustic diner threatens to derail his mission in this noir-style cloak-and-dagger thriller.

I review films and TV shows and I love to read books and comic books, but the greatest form of entertainment is the musical. There is nothing better than being a part of an audience […]

I was 9 years old when the largest hostage rescue operation in American history happened. It took place on April 4, 1991 in Sacramento, California when 4 gunman took hostages at a Good Guys! electronics […]

“Relatable” is not the word that I would use to describe Ellen DeGeneres, yet it is somehow the premise of her new stand-up special on Netflix. I’m a big stand-up comedy fan. My wife and […]