Shark movies are a dime a dozen at this point, every streaming service has them, every horror/thriller film list mentions at least a couple. They are incredibly pervasive in the film industry and everyone thinks that they can recreate the magic of Jaws. While there have been a few memorable shark-based films over the years and some interesting takes on this particular sub-genre, most of what we see is repetitive and expected. There’s little chance to surprise the viewer anymore because most people in this space simply aren’t that creative.

Andrew Traucki, the film’s writer/director, tried to give us something new but he fell into many of the same tropes that are detrimental to other horror and thriller flicks. Where he was inventive was the background for the story. He gave us character development, a backstory that was intriguing, and people reacting to a shared, yet different experience – the loss of a murdered friend / family member. Unfortunately, after he spends all that time carefully crafting an interesting story, he ruins it in order to push us to the edge of our seats.

I want to give the audience a tense, thrilling adrenalin ride. I strongly believe that the best way to achieve this is by using suggestion rather than revelation. The real fear in this story isn’t a menacing shark but wondering where that shark might be and will it attack? In other words like in life, the fear and tension in The Reef: Stalked will come from the unknown and uncertainty, what you can’t see rather than what you can.

If the film had pulled off this description from Traucki, it would probably be an excellent watch. Instead, there is almost no tension. Instead, you find yourself banging your head against the wall or yelling at the screen. TVTropes would call this Contrived Stupidity. Spearfishing.com.au says, “Spearguns do offer some protection against sharks and other underwater predators.” However, in the film, our protagonists, who have spearguns, use everything but the spearguns in an attempt to defend themselves – a rusty boat anchor, a paddle, a net, a fish caught with the speargun, but never the speargun itself. When they flip their kayaks, instead of righting them, they simply try to climb onto the kayak without flipping it. Intelligence is tossed out the window and all attempts at tension are built by continually making our main characters less and less intelligent.

One of my favourite parts of the film comes when they realize that a boat is leaking. They proceed to bail out the boat for a few seconds before forgetting about the leak and stopping all bailing until the boat is nearly full of water. This happens more than once. These are the types of moments that make it impossible for the viewer to watch the film without feeling pain. At this point, I was actually uncomfortable with how dumb the characters had become and how poor their choices were. I wanted to finish the movie, but only out of a sense of writing this review rather than any desire to see how the film concluded.

At the end of the day, I wouldn’t recommend the film to most people. If you enjoy sharks, bikini clad women, or scenic views of Australia, then maybe you should check this movie out. If you’re bored and have a Shudder subscription (which is 100% worth the investment), this might be good background noise. I do not, however, recommend investing a Friday or Saturday night in this film, there are definitely better options available that won’t leave you angry over the way that interesting characters were butchered in some misguided attempt to create tension.

The Reef: Stalked was released in theaters and streamed on Shudder on July 29. 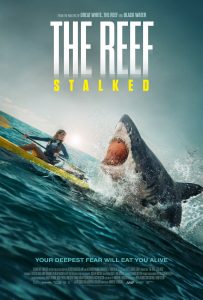 Movie description: In an effort to heal after witnessing her sister’s horrific murder, Nic travels to a tropical resort with her friends for a kayaking and diving adventure. Only hours into their expedition, the women are stalked and then attacked by a great white shark. To survive they will need to band together and Nic will have to overcome her post-traumatic stress, face her fears and slay the monster.