As soon as I heard Ellen Page was starring in a TV show, I knew I was watching it. When I found out it was based on a comic book, I was even more excited. The concept behind The Umbrella Academy is quite interesting – on the same day in 1989, 43 children are born to women who suddenly become pregnant and 7 of these children are adopted by an eccentric man who realizes they have super powers and trains them to be a team of superheroes. We encounter them in the present day after the death of their “father” and learn their story via flashbacks and present day interactions. The series is quirky and addictive with several jaw dropping moments. One, in particular, occurs at the end of episode 8 when my wife was left with her jaw hanging, unable to speak. I say this as a warning – don’t plan on stopping after episode 8, at that point, you’re basically committed to finishing the series. They’ve done a wonderful job of creating a world of intrigue and mystery that keeps bringing the viewer back for more. The series was so amazing that everyone I see talking about it has already finished binge watching it and is eager for a second season.

For those unfamiliar with The Umbrella Academy, it’s based on a graphic novel written by Gerard Way, the lead singer and co-founder of My Chemical Romance, which won the Eisner Award for Best Limited Series in 2008. The Eisner Awards are the comic book industry’s equivalent to the Academy Awards, indicating the popularity of this series.

One of the greatest aspects of the series is the sound track From expertly choreographed fight scenes to an epic 80’s dance montage, the series has it all and the music fuels the entire experience. I don’t believe that they could have done a better job of selecting the music. One of the greatest movie fight scenes in history is the pub fight in Shaun of the Dead with Queen’s Don’t Stop Me Now playing. The Umbrella Academy makes use of this classic song in an amazing fight scene that rivals the brilliance of the Shaun of the Dead scene.

We also have to talk about the casting. Ellen Page was arguably the biggest name attached to the series, my wife and I have loved so many of her films – Hard Candy, Juno, Whip It, and so many more – so that guaranteed we were going to watch this series. As a side note, I’d always hoped that we would get a Hugh Jackman and Ellen Page, Kitty Pryde and Wolverine film based around the 6-issue limited comic book series from the 80’s but it never did materialize. She was amazing as Vanya, you couldn’t help but feel sorry for her at times, but also dislike her during other scenes. Tom Hopper and Robert Sheehan also deserve recognition, particularly Sheehan for his portrayal of Klaus, the character provided much of the comic relief and was delightful to see on screen. Finally, I need to mention the actor playing their father, Sir Reginald Hargreeves, Colm Feore. He was in one of my favourite Canadian films, Bon Cop Bad Cap, and he did a great job becoming the character, without seeing his name in the credits, I doubt I would have recognized him.

Finally, we need to talk about the filming location. The series was filmed in Toronto and it was great seeing familiar locations on screen. One of the popular locations in the series, Griddy’s Doughnuts was the former Gladstone Cafe. At another point, the intersection of Bay St and Temperance St is used and you can very briefly see Old City Hall during the scene. The Elgin Theatre and Massey Hall also make appearances in the film.

I’ve seen both negative and positive reviews of the series so far, those that review this negatively might be crazy… I’m not sure how else to explain someone not liking it. Check it out on Netflix, you won’t be disappointed. 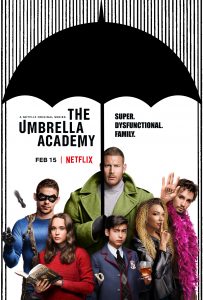 Description: On the same day in 1989, forty-three infants are inexplicably born to random, unconnected women who showed no signs of pregnancy the day before. Seven are adopted by Sir Reginald Hargreeves, a billionaire industrialist, who creates The Umbrella Academy and prepares his "children" to save the world. But not everything went according to plan. In their teenage years, the family fractured and the team disbanded. Now, the six surviving thirty-something members reunite upon the news of Hargreeve’s passing. Luther, Diego, Allison, Klaus, Vanya and Number Five work together to solve a mystery surrounding their father's death. But the estranged family once again begins to come apart due to their divergent personalities and abilities, not to mention the imminent threat of a global apocalypse. The Umbrella Academy is based on the popular, Eisner award-winning comics and graphic novels created and written by Gerard Way (My Chemical Romance), illustrated by Gabriel Bá, and published by Dark Horse Comics. The live-action series stars Ellen Page, Tom Hopper, Emmy Raver-Lampman, Robert Sheehan, David Castañeda, Aidan Gallagher, Cameron Britton, and Mary J. Blige, and is produced by Universal Cable Productions for Netflix. Steve Blackman (Fargo, Altered Carbon) will serve as executive producer and showrunner, with additional executive producers Jeff F. King (Hand of God), Bluegrass Television, and Mike Richardson and Keith Goldberg from Dark Horse Entertainment. Gerard Way and Gabriel Bá will serve as co-executive producers.