For the 80s and 90s, there was one actor that made so many of my favourite movies – Emilio Estevez was a large part of my formative years. As such, I always gravitate toward movies he’s involved with. That’s why I jumped at the chance to watch The Public, which he not only stars in but also wrote and directed. Let me stop readers that trust me here by saying don’t even read this, simply go and watch the film. I question a lot of the films that win awards… this film is award worthy, I’m not even sure I can put everything I felt watching the film into this review, but I’ll try my best to get my feelings across.

The film follows Stuart Goodson (Estevez) who works at the Cincinnati Public Library (“The Public”) with wannabe activist Myra (Jena Malone). Every day, the library is filled with people many of whom are among the city’s most vulnerable – the homeless, the addicts, and the mentally ill – all just looking for a place to clean up and warm up. The library clearly has regulars who Goodson watches over and helps when he can; it’s very clear that he cares for these people and they care about him. The film also features Christian Slater as Josh Davis, the city prosecutor running for mayor, and Alec Baldwin as Detective Bill Ramstead, a police negotiator whose son is an addict on the streets. The cast is rounded out with Taylor Schilling as Angela (Goodson’s building manager) and Gabrielle Union as Rebecca Parks, a reporter that I’m positive you’ll hate.

As a cold front sweeps across the city, the shelters fill up and the library regulars have no where to go. Watching their friends die on the streets has taken it’s toll and they refuse to leave the library one night at closing, instead occupying the library and staging a peaceful protest. Goodson finds himself at the centre of the occupation and is soon the leader and organizer of the entire protest. The complaints are valid – these people don’t want to freeze to death and the library is there and available. At the same time, the police are looking for a way to end it – at times it feels like they’ll resort to any means necessary.

From the relationships these homeless individuals share to the outpouring of support from the community as it sees the news, the movie highly emotional, drawing tears from me on multiple occasions. It was, at the same time, one of the funniest, most heartwarming films that I’ve seen in a while. At times, I laughed so hard that I had to pause or rewind the film just to catch dialogue that I had drowned out. The film is an emotional roller coaster and, if that’s not enough, I spent half the movie on the edge of my seat wondering what the police would do and how they would react. The film simultaneously shows us the best and worst that humanity has to offer and reminds us that we all need to do better.

From an all-star cast to a perfectly written script to emotional scenes and phenomenal acting, this movie has it all. This movie has absolute rewatch value and is likely to be a film that you want to share with everyone you know… it’s simply too good to keep to yourself. 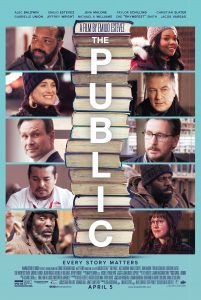 Movie description: In "The Public" an unusually bitter Arctic blast has made its way to downtown Cincinnati and the front doors of the public library where the action of the film takes place. At odds with library officials over how to handle the extreme weather event, some homeless patrons turn the building into a shelter for the night by staging an "Occupy" sit in. What begins as an act of civil disobedience becomes a stand-off with police and a rush-to-judgment media constantly speculating about what's really happening. This David versus Goliath story tackles some of our nation's most challenging issues, homelessness and mental illness and sets the drama inside one of the last bastions of democracy-in-action: your public library.