The Christmas Train was a great Hallmark Channel movie but, before we talk about the actual film, we need to discuss the cast. Dermot Mulroney, a RomCom king, appearing in movies like My Best Friend’s Wedding and The Wedding Date, as Tom Langdon. Kimberly Williams-Paisley, from Father of the Bride and the TV series According to Jim, as Eleanor ‘Ellie’ Carter. Danny Glover, from everything, but mainly Lethal Weapon, as Max Powers. Joan Cusack, from Grosse Pointe Blank, Arlington Road, and, more recently, Shameless, as Agnes. Based on my past experience, this is power house casting for a Hallmark Channel movie and they didn’t disappoint.

The movie follows a Christmas train, travelling from Washington, D.C. to LA over a four day period. The train is filled with interesting characters from our leads, a journalist, a script writer, and a world famous director to the supporting characters which include a snoopy woman, a widower, a retired train man, a choir, a psychic, and a young couple about to be married. The character development was something that I really enjoyed with this film… everyone had a place and a reason. It was quite incredible.

Tom is riding the train in order to write a story about train travel in the modern day as he heads to LA to meet up with his long distance girlfriend. On the train, he meets Max Powers, a charismatic director, who insists that Tom work with a script writer he is travelling with while they write his next great movie, which will take place on a train. At dinner, we learn that Tom knows the script writer, Eleanor, as the pair used to write together overseas and were in a serious relationship before she walked away from him for a yet to be discovered reason. While they are cold at first, the old flame between Tom and Ellie eventually ignites and sparks fly, just as Tom’s girlfriend arrives, putting a damper on the entire situation and asking Tom to marry her.

In the background of this love story, we have side plots involving all the characters including petty thefts of personal items and an avalanche that strands the train for a while. The young couple (Steve and Julie) are also married after their relationship is saved by Tom and Ellie. One small goof that stood out to me was when Julie commented that her grandparents were married on a train but later she said it was her parents. This had me wondering if she was a con artist, but that didn’t fit the plot of the movie. Eventually, Tom breaks things off with his girlfriend, opening the door for he and Ellie. Ultimately, they end up together. You can read the spoiler below for my thoughts on the ending, but suffice it to say I greatly enjoyed the movie. I will say that my wife sat down during the last 10 minutes of the film and, without seeing the story to this point, asked why it was making her tear up. The movie was well done from every angle.

Spoiler
Near the end of the movie, we learn that John, the widower, was responsible for the thefts. While Agnes points out that he had a record for petty thefts before he married his wife, I refuse to accept that explanation. He was coping with loss and most likely still mourning the death of his wife. I like to think that he targeted personal items with meaning to the individuals as a small way of reminding them to cherish what they have while it is around. Ultimately, he returns most of the items, so I’d rather take away a meaningful message than assume a lovable character was actually bad. The movie ends with the revelation that the majority of what happened on the train was choreographed by Max Powers to bring Tom and Ellie back together. This involved the psychic, the young couple, and even Tom’s girlfriend. Looking back, there were a few things that were unbelievable (see my comment above about Julie) and a few moments that foreshadowed this, but it was a great twist that I didn’t see coming. This type of twist is not something that I expect from a Hallmark Channel movie but it was a great addition and brought the movie to a new level of awesomeness. 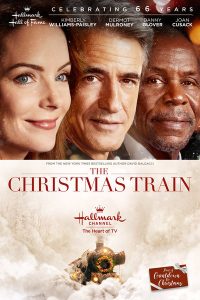 Movie description: Disillusioned, globetrotting journalist Tom Langdon must get from Washington, D.C. to Los Angeles in time for Christmas. Forced to take the transcontinental trip by train and determined to chronicle his adventure, Tom finds himself westbound with a variety of characters who open his eyes to wondrous possibilities, and the opportunity for love he thought had been forever lost.