Have you heard the expression, “Do one thing and do it well?” It’s an expression that I wish writer/director Brea Grant had heard when she was writing 12 Hour Shift. I dislike checking multiple boxes for the genre of a film, but I couldn’t pick one – Comedy, Horror, Thriller. The movie is all of these, but it’s not very good at any of them. The characters are over the top in the way that the characters are in Hot Shots! or The Naked Gun, but this isn’t a parody. It’s a film that is just too busy to be good.

In 12 Hour Shift, we have a couple of nurses that kill patients and sell their organs, via one of the nurse’s cousin to organ traffickers. When an organ goes missing, the movie struggles to find a place to exist and the results are completely absurd. The sad part is that the movie is on the cusp of being a good film, one that I would recommend to friends and family. The problem, however, is that instead of being the dark comedy it was perfectly setup to be, it takes itself too seriously. The lead character, nurse Mandy (Angela Bettis), has a history of being abused and drug abuse. The drug abuse pushes the film from comedy to just plain old concerning. It was a weird choice for a character flaw that Grant described in her director’s statement.

In this film, I wanted to do the same thing — blur the harsh reality of opioid use, lack of small town services, the understaffing of a hospital with the dark glamor of an urban legend involving criminals, lost kidneys and dance sequences. In my opinion, no movie is complete without a little dance sequence.

As I said when I started writing, “Do one thing and do it well.” That’s a lot of things and most of those things are on the edge of good, but they always seems to fall short. This is the second feature film that Grant has written/directed and it sounded amazing. It was just too busy. There were a lot of threads to the plot and many of them were unnecessary. I was drawn to the film because it featured David Arquette and Mick Foley. Arquette’s character felt like an afterthought just to add him to the script, his storyline had no purpose and didn’t contribute to the overall arc of Mandy. Foley was also underutilized… appearing as the big boss of the organ traffickers for a single scene. They should have removed Dusty Warren’s Mikey (Foley’s underling) from the script and replaced him with Foley.

Here’s my biggest problem… there was some solid comedy in the film. From a scene where two different characters use knives in two different ways while other characters sing the Christian hymn Are You Washed in the Blood was amazing. The final scene featuring Mr. Kent (Tom DeTrinis), a hospital regular, was highly entertaining. Arquette had numerous great one-liners (even if his character didn’t make sense). Even with all of this the inconsistencies, the attempts at seriousness, and the business of the film were all detractors.

I don’t want to say don’t watch this movie because it definitely has a few surprising scenes that are quite enjoyable, but I will say buyer beware. Know that you’re going into a movie that could do with refinement and polish, a movie that the entire time you’ll find yourself saying, “this is so close to good.” If you can accept that, this movie is worth checking out.

12 Hour Shift is available in theaters and on demand on October 2. 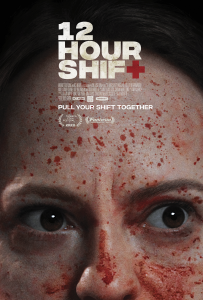 Movie description: It's 1998 and over the course of one night at an Arkansas hospital, a junkie nurse, her scheming cousin and a group of black market organ-trading criminals get caught up in a heist gone wrong.

I will always be able to tell you exactly where I was when I learned that Robin Williams had passed away. On August 11, 2014, my wife was out of town visiting family and I […]

While this was on Hulu in the United States, it was a rental up here in Canada. My wife and I watched it this weekend and we were quite entertained. The film is not your […]