In Spring 2020, not too long into the pandemic and having postponed our work on our next feature-length project, I was reviewing footage of the quarantine procedures for the Apollo 11 mission. These procedures were a necessary precaution that NASA implemented in case the first lunar mission brought back any “moon germs” to Earth. Two years ago, I thought it only deserved a passing shot or two during the end credits of Apollo 11. But as the events of last year unfolded the footage took on a new urgency and, in many ways, mirrored our current situation – the astronauts in their masks and biological isolation garments, the support crew quarantined with them, a birthday spent in isolation, a team of scientists assessing the potential dangers of the lunar material, and speeches made in the House chamber at the U.S. Capital to a joint session of Congress. These scenes unfolded against the backdrop of the late 1960’s – a time of tremendous change in the United States and around the world. Creating a short film from these materials became our new project.

I think that Miller does a wonderful job of describing how these scenes relate to the modern world. As I watched the film, some of the scenes felt all too familiar. Although it was more than 50 years ago, many of the scenes could have been filmed in the past year. People playing cards, waving at others through windows, communicating through windows, celebrating birthdays without loved ones. It was a very thought provoking film. These men traveled to the moon, returned, and had to wait to hold their loved ones. So close, yet so far away. It was really quite fascinating to see that original footage and how the astronauts quarantined

So, where was the film lacking? First and foremost, I wanted more… 23 minutes was too short, I could have easily consumed a feature length documentary following just the quarantine. I’m not sure how much footage exists from that period beyond what was included, but I would have loved to see the scenes extended and additional moments added. At one point, the astronauts are interviewed via the window. I would have loved to have heard more of that interview footage, to see it cut with any surviving news clips. I actually hope that this is a topic that Miller explores further and, if sufficient materials exist, I hope we get a feature length doc down the road.

If we do get a longer documentary, I hope it addresses the other flaw. While at times, it was nice to hear the audio from the film… a lot of the film was filled with silence. I would have loved narration. I can think of a dozen actors who would have done an awesome job narrating what we were seeing. Should this film see a DVD/Blu-ray release in the future, I really hope they add a commentary track and get it narrated. Having a narration from a celebrity and a commentary track from anyone who worked on the project and a historian would be really cool additions to this awesome short film.

NEON released Apollo 11: Quarantine exclusively on IMAX on January 29 and will release it On Demand on February 5. 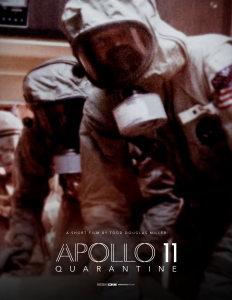 Movie description: Summer 1969. The astronauts of Apollo 11 successfully land and walk on the moon. The crew will now quarantine for 21 days following contact with lunar material. The clock starts when the hatch is closed on the lunar surface. 3 days later they return to Earth...