If nothing else, Sweet Parents is a roller coaster ride of emotions. It is also difficult to talk about the emotions it produces without breaking my rules around spoilers, I need to talk about this film at least in broad strokes.

The film introduces us to Gabby (Leah Rudick) and Will (David Bly), a young optimistic couple hunting for an apartment in New York City. They move into a tiny apartment and say that it is only temporary. Within the first two minutes of the film, we are propelled 8 years into the future and the couple is still in the same apartment, less optimistic and clearly struggling. At this point, there’s already a storm of feelings brewing. You feel bad for them that they haven’t moved out to something better. You start to care about them. You start to worry about them.

It is worth noting before we move on that Leah Rudick and David Bly wrote this film together and Bly also directed it.

Don’t worry though. That worry is short lived when you realize that the couple makes bad choices. In an early scene, Will complains about bugs on a chicken in the fridge, but the chicken is sitting unwrapped on a plate, a mistake he will repeat. How does a chef not wrap their food properly? Additionally, while they struggle to make ends meet, they are eating out and drinking at a club, this seems pretty irresponsible. Then again that lack of responsibility is pretty typical for their generation.

Sweet Parents is not about the starry-eyed young couple fresh to New York, full of fire and passion, but rather, it’s about the couple that is burnt out, contemplating giving it all up, asking themselves “What’s the point? Why are we still here?” and making one last ditch effort to avoid the feeling that they’ve wasted the last decade of their lives.

I completely understand Bly’s goals and comments here, but I feel they only apply to Gabby. Will is a horrible human being. This was an odd choice to me. Making him into such an unlikeable person feels like it goes against the attempts to evoke sympathy toward the couple. It is impossible to feel bad for him, you just feel worse for Gabby and continually scream at the screen for her to run from him. Will feels he deserves his own restaurant when he’s barely accomplished anything in his career… he just wants to be propelled to the top of the industry without putting in the effort. He quits his job because his manager is too mean. In reality, Will showed absolutely no passion in the kitchen and just tossed things at the plate with a clear hatred for his job. If he thought his manager was tough, I’d hate to see him in front of Gordon Ramsey.

The film, called Sweet Parents, explores the idea of sugar mamas and sugar daddies as a way to survive in the big city, the idea being that if each member of a couple gets one that they become their sweet parents. The idea is presented to Will and Gabby by someone they meet out at the bar, although that individual seems to be describing a relationship more akin to prostitution at times, something Will hints at as he and Gabby discuss the idea afterward. Ultimately, each member of the couple finds a sweet parent, but in completely different ways. While Gabby’s happens innocently and with no ill intention and with complete honesty about having a boyfriend, Will flirts with a woman and invites her to dinner. He is, without a doubt, simply cheating on Gabby. This just adds to the theory that he is a horrible person.

When Will decides it is time to introduce their sweet parents, he simply does so without any notice to Gabby. More of him being an absolutely awful human being follows this introduction. At this point, he deserves, to put it bluntly, to get the shit kicked out of him. You finally get a moment of happiness and excitement as Gabby succeeds and Will disappears from her life. That happiness will, unfortunately, be short lived.

I have revealed more than I normally would about a film, but I needed to vent my frustration with Will. He will go down as one of the most unlikeable characters that I’ve seen in a film. There were times that I was so angry at the character that I wanted to turn the film off, but I kept watching, hoping someone would punch him in the face. Sadly, it does not happen.

I feel that my view of the film is so far disconnected from Bly’s that I wonder what others think. The film is available On Demand now and I’d love to know your thoughts after you watch it. Perhaps you side with Bly and think Will just made a bad decision, or do you agree with me that Will is just human trash. This film won’t be for everyone, but if you enjoy films that look at humanity and our interactions, I think you’ll enjoy the movie. 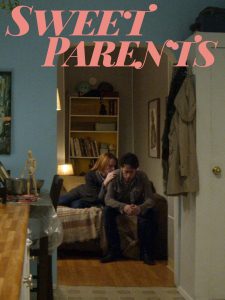 Movie description: Sweet Parents follows the pursuit of success, and subsequent struggle, in the New York culinary and art worlds. Gabby, a sculptor, and Will, a chef, start side relationships with a successful older man and woman, or “Sweet Parents”, in a last ditch hope of supporting their careers, ultimately pitting true love against ambition, demanding the sacrifice of the one you love for what you love.