Unfortunately, I missed out on seeing Solo in theatres. This was the first Star Wars movie since the third trilogy started, that I didn’t make it to theatres to see. This meant one thing, and one thing only, I had to pre-order it on iTunes. The movie’s digital release was Friday and, this weekend, my wife and I settled in and watched the movie. I didn’t go in with high expectations, as I’d heard mixed reviews. I was, however, rather surprised at how much I enjoyed the movie. In hindsight, I probably shouldn’t have been surprised. I think that Donald Glover and Woody Harrelson are amazing actors (this was the first time I’d seen Alden Ehrenreich on screen and my only previous Emilia Clarke experience was Terminator Genisys). A pleasant surprise was Phoebe Waller-Bridge as the voice of L3, she’s the creator of Killing Eve, a BBC America series my wife and I just finished watching.

So, what about the movie? It is a great addition to the Star Wars universe and a worthwhile watch for both fans of the series and outsiders, as it truly is a stand alone film.  Alden Ehrenreich was a perfect fit for a young Han Solo and, while it was a point of contention for some, the origin story of his name to be quite amusing. It was, however, Donald Glover that stole the show as a young Lando Calrissian, he had every bit of the swagger that Billy Dee Williams brought to the screen and, perhaps, a little something extra. He had the air of superiority that followed Harrison Ford’s Han around in A New Hope, perhaps the Millennium Falcon imbues its owner with that quality. Lando’s relationship with L3 was very special and quite entertaining to watch. While I don’t want to seem crazy on my first review, I’d love to see Donald Glover nominated for a Best Supporting Actor Oscar for this performance.

On a completely unrelated note, Emilia Clarke was amazing as Qi’ra, but I often found myself thinking I was looking at Melissa O’Neil’s character from Dark Matter.

If you are a fan of lighthearted action movies, great acting, or the Star Wars franchise, this is probably a movie for you. Beyond that, this movie answers so many questions from the Star Wars universe that it is a must watch for any fan of the original movies. How did Han meet Chewie and Lando? How did Han acquire the Millennium Falcon (we know the basics but Solo gives us much more insight)? Why is Han the way he is? If you’ve ever wanted answers (and good answers) to these questions, see Solo today! 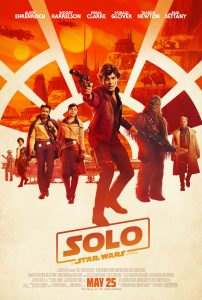 Movie description: The story of Han Solo prior to meeting Luke Skywalker, where we learn of his adventures meeting Chewbacca and Lando Calrissian.