Since it was Father’s Day, I called my dad tonight after finishing Murder Mystery. We discussed how it was a good film, but not a typical Adam Sandler comedy. I went into it expecting the comedy you find in his other films, instead this reminded me more of The Pink Panther or an Agatha Christie novel, which makes sense when you consider that the train scene at the end of the film has our stars riding the Orient Express. Looking at this as a Sandler style comedy, it is disappointing, but looking at it as a peer of The Pink Panther, it’s a much better film.

The film stars Sandler and Jennifer Aniston as Nick and Audrey Spitz, a married cop and hairdresser from New York finally taking their honeymoon on their 15th wedding anniversary. During their flight, Audrey meets Charles Cavendish (Luke Evans) who invites the pair to join them on his uncle’s yacht for a wedding between his uncle and his former fiancée. Rather than a budget vacation, the couple agrees and joins Charles on a mega-yacht. While there, they end up witnessing the murder of Charles’ billionaire uncle Malcolm Quince, a crime for which Nick and Audrey are framed.

The remainder of the film is filled with more murders, awkward situations, and bumbling detective work by Nick and Audrey, making the similarities between this film and The Pink Panther even more obvious. There are a couple of really standout scenes, including the moment when Nick and Audrey get inside a Ferrari Testarossa, a car that Nick is very excited to drive only to forget that they’re in Europe and Audrey gets in the driver’s side. The following car chase is quite entertaining and a lot of fun to watch. Another interesting scene involves a library and bookshelves. I won’t describe the scene in detail, but I was interested to learn from the film’s production notes that no CGI was used to create the scene, instead it was rigged up as a practical effect.

For hardcore Adam Sandler fans, you may recognize Sandler’s wife Jackie, as well as their daughters Sadie and Sunny in the film. Watch closely for their cameos! I was a little disappointed to not see any of the typical Sandler movie cameos, but again, this isn’t your typical Adam Sandler movie. Another Easter Egg to watch for is the Netflix films playing during the airplane scene, including Game Over, Man!, another film directed by Kyle Newcheck, the director of this film, for Netflix.

At the end of the day, this isn’t the greatest Sandler film ever made, but it’s a fun film and a decent mystery. If you go in expecting a mystery and watching closely to see “whodunit”, you’ll be pleasantly surprised. How far into the movie did you get before you realized who the killer was or were you surprised until the big reveal? I knew it couldn’t be obvious and I felt like a few hints were dropped throughout the movie that would be referenced during the reveal, but I was surprised… it wasn’t who I thought it would be.

Murder Mystery is available now on Netflix, so check it out if you have a Netflix subscription. 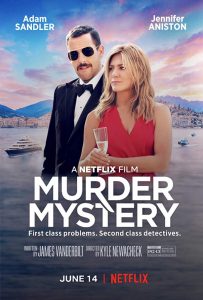 Movie description: When an NYC cop (Adam Sandler) finally takes his wife (Jennifer Aniston) on a long promised European trip, a chance meeting on the flight gets them invited to an intimate family gathering on the Super Yacht of elderly billionaire Malcolm Quince. When Quince is murdered, they become the prime suspects in a modern day whodunit. MURDER MYSTERY reunites Adam Sandler and Jennifer Aniston along with an ensemble cast of global talent.