It has finally happened! We’ve found a movie that even The Rock couldn’t save. I was really surprised because I thought this movie had all the makings of an awesome summer popcorn flick. Starring Dwayne ‘The Rock’ Johnson, who has become a blockbuster machine, and Neve Campbell, who won our hearts as Sidney Prescott in Scream, and directed by Rawson Marshall Thurber – the director behind We’re the Millers and Central Intelligence, two comedies with plenty of rewatch value, I expected this movie to be a summer hit. Instead, I realized that every movie that Rawson has written alone has been weak – just as Skyscraper is Johnson’s weakest movie, Dodgeball was Vince Vaughn’s weakest film.

If your question right now is, “Should I watch this?” The answer is yes. It’s not a great movie but that’s not the fault of the cast, they did everything they could to save the movie. Also, you can’t go wrong spending a couple of hours watching Johnson and Campbell on screen. The movie is the type of movie that you’d expect to see Steven Seagal, Jean-Claude Van Damme, or Dolph Lundgren in – there’s nothing wrong with it and it’s entertaining, but it’s never going to be considered a great movie. The movie telegraphs a lot of the events, indicating that it’s not expecting the most intelligent of viewers and making it a great movie if you want to turn off your brain and relax.

In the end, the plot is about what you would expect. Will Sawyer has an extensive background in the military and FBI but now he assesses building security due to the loss of a leg. While assessing a building in Hong Kong, his wife and children end up in the wrong place at the wrong time as Sawyer is betrayed by his friend and the owner of the building is targeted by a criminal mastermind. After a series of impossible events that cause the audience to ‘ooh’ and ‘ahh’, Sawyer saves the day, giving us the happy ending this fairy tale deserves. 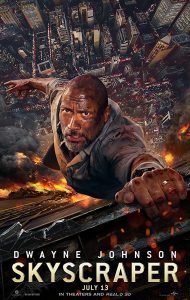 Movie description: Will Sawyer, hired to review security for a skyscraper in Hong Kong, must rush to save his family from the burning building.