It feels like there’s been a large uptick in thrillers recently and they aren’t necessarily all good. So, I was pleasantly surprised when Shattered turned out to be a rather well done thriller that kept my attention. It combined traditional thriller elements with the next-gen smart home thriller elements that have been featured in a lot of more recent thrillers, and that blending was done really well. Mixed with an excellent cast, it is a great way to spend an hour and a half.

From the moment I read the script, I loved the creative challenges and opportunities that SHATTERED presented. Taking the audience on a journey from all the excitement and passion of a romance at the start of the film, to an all-out thriller by its conclusion was a big attraction for me, and when talent of the level of John and Frank came in to support Lilly and Cameron, I knew we could have a special movie. I had been a fan of David’s razor-sharp script for a short time before Silver Reel and Construction Film approached me asking if I would like to Direct, and of course I was excited to come onboard.

I found myself agreeing with the director as I read this statement. I wasn’t sure what to expect initially but it definitely feels like a romance film turned thriller as you watch it and the cast performed brilliantly. Cameron Monaghan is a brilliant actor, he was fantastic in Shameless and seeing he was the star is what initially drew me to the film. I was unfamiliar with Lilly Krug before the movie but she was great on screen and I’d gladly watch more films involving her. That brings us to the big names – John Malkovich and Frank Grillo. Grillo has been popping up everywhere lately and, as I’ve mentioned before, he reminds me of Steven Seagal 20 years ago, pumping out films at an incredible pace. I’m a fan of his work and he’s great in the roles that he is given.  John Malkovich is one of my favourite actors. I could listen to him read the phonebook. In fact, Audible should make that happen… ‘The Phonebook as read by John Malkovich’.  While Malkovich and Grillo didn’t have the biggest roles, they were both great contributors in the film and Malkovich brought a few laughs which is needed in a dark film like this.

I don’t want to spoil anything, so I’m going to avoid talking about the film, but let me just say that the film is filled with a lot of gruesome fun. There were one or two scenes that I expected, but my wife was completely caught off guard by them initially, so depending on the frequency with which you watch thrillers, your mileage may vary on how much surprises or shocks you. What I will talk about, however, is how fantastic and unexpected the films conclusion was. Personally, I have outstanding questions about what happened next to those involved, but that is just my weird need for closure. I thought it was an interested and unexpected conclusion. Although, at the same time, it was exactly what needed to happen to wrap everything up. I’d love to know whether or not you were surprised, so, reach out and let me know.

Shattered will be available in select theaters and on demand on January 14 with a Blu-ray and DVD release on February 22. 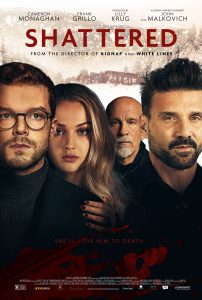 I’ve been debating how I would review TV shows. I’ve already reviewed a couple and I definitely enjoy talking about them, but I wasn’t sure if I wanted to do individual episodes, full seasons, or […]