Part of me considered giving this a second chance but I couldn’t bring myself to turn it back on. This movie, found on Netflix, seemed like it would be up my alley. It has Mel Brooks associated with it as an Executive Producer and it was written and directed by his son, Nicholas. Described as a gender-swap romcom, it fit several of my favourite categories – romantic comedy, body swap, Mel Brooks. I managed to make it 8 minutes into this 103 minute film. The over the top alpha male portrayal could have worked with a more capable actor, but put in the hands of an actor whose biggest claim to fame is a guest spot on an episode of Blue Bloods, it was a disaster. ‘Painful to watch’ would be an understatement. I realize that Brock Harris was unlikely to be in the film very long, since his character experience the gender/body-swap, but he ruined any chance I had of moving forward with the remainder of the film. Combine this with an serious lack of quality (low budget films of the 70s appear better made than this 2015 film) and you end up with an awful experience. This is not out here as a review, but to serve as a warning – Do Not Watch This Movie!

Note: You’ll find the ratings missing, as I couldn’t even bring myself to give this half a star in any category. 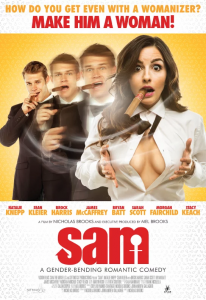 Movie description: The story of an asshole man who is transformed into a woman and learns to see the world through a woman's eyes.