At this point, it should be no secret that I’m a fan of Hallmark Channel movies and I was disappointed by all the talk of Hallmark Channel’s Countdown to Christmas, until Corus Entertainment announced that W Network would be carrying the content in Canada. It’s not a perfect partnership as the movies air at different times, but it is a start and it has brought me a slew of new Christmas movies to watch. This year, for me, started with Rocky Mountain Christmas and I couldn’t have picked a better initial movie.

The movie’s premise has all the building blocks of a classic Hallmark Channel movie. Sarah (played by Lindy Booth) suffers a breakup from her high profile boyfriend, prompting the rumour mill to follow her around New York City. She escapes for the holidays to her uncle’s ranch to spend time with her uncle and her brother. It will be their first Christmas since Sarah’s aunt passed away. Suddenly, a famous leading man, Graham (played by Kristoffer Polaha) shows up to stay on the ranch and learn about life as a ranch hand for an upcoming role. There are sparks and then fireworks as we get a touching love story and a great Christmas movie.

Let’s start by talking about the movie’s co-stars. Lindy Booth played the most interesting member of The Librarians cast, Cassandra Cillian. The series ended prematurely and we were robbed of Lindy’s amazing character. Her presence in the film was enough to guarantee I watched it but then she was partnered with Polaha, who suffers from the single-season curse on every TV show he lands. My wife and I fell in love with him during Life Unexpected, an underrated TV series in which he starred along side Britt Robertson and Shiri Appleby that had the potential to be as great as Parenthood, This is Us, or A Million Little Things in terms of heartfelt, emotional television. Booth and Polaha together was enough to ensure I went into the movie with a smile on my face.

The movie was able to maintain that smile, combined with a few heartfelt tears, until it ended. Sarah and Graham are perfect for each other, her coming out of a relationship and struggling with family issues, especially the absence of her aunt Beth and him looking to connect and find something real. While Sarah pushes Graham away as a another Hollywood fake, Graham makes it obvious that he wants to be more than the guy on the screen, he wants to help out and make a difference. There are several cute moments where Graham makes an effort to show just how much he cares.

I feel like the movie had enough of the “will they, won’t they” from Sarah’s past relationship and her unwillingness to get involved with someone famous again. Gregg Rossen, Brian Sawyer, and Elena Zaretsky, the film’s writers, disagreed and introduced Nicole (played by Paige McCulloch) as Graham’s co-star in his upcoming film. The studio was trying to push them together and create a relationship to build press, something that Nicole was eager to pursue. This added to the drama briefly but I’m not entirely sure it was a necessarily plot point. It does, however, provide an escape for Sarah’s brother, Cody (played by Chris McNally) as the film concludes. It works well as a device to move this subplot forward (which wouldn’t exist without Nicole) but I wasn’t a fan of her interference with the main plot.

That said, the movie was a great start to my Christmas movie binge and I look forward to watching more Hallmark Channel movies in the near future. 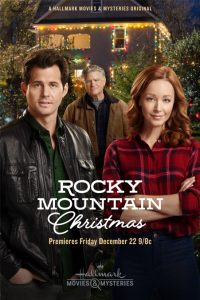 Movie description: Sarah Davis heads to her uncle’s struggling ranch to escape New York and the spotlight from a recent breakup. Returning home for the first time since her aunt passed, complications arise when Graham, an entitled Hollywood star, arrives at the ranch to prepare for his next film. As Sarah and Graham start to bond, Sarah may get more for Christmas than she bargained for.