The other night, my wife and I watched Always Be My Maybe, a collaborative effort from Ali Wong and Randall Park, two long time friends who were looking to create their version of When Harry Met Sally. It’s a really cute romantic comedy about two childhood friends who part ways in their teen years and come back into each other’s lives a decade and a half later. As someone who loves romcoms, nostalgia, and encounters with the past, this movie spoke to me in so many ways. Wong and Park were great on screen together and could easily do repeat romcoms in the same way that Tom Hanks and Meg Ryan did in the 90s. I also thought there was something really special about finding your way back to your childhood love so many years later, even without the romance, just the rekindling of that relationship was enough to excite me about the film.

I want to talk briefly about the title of the film, Always Be My Maybe. When I first saw the title, I was expecting that “If we’re both single at 40, we’ll marry each other” deal that Robin and Ted have in How I Met Your Mother. Watching the film, at one point Wong’s Sasha Tran mentioned to Park’s Marcus Kim that she’s considering having a baby alone and I thought that maybe we’d see some twist on the sperm donor storyline. Instead, we get that romcom “feel-goodness” that only a story involving unexplored and long buried emotions can bring us. The story introduces us to Sasha and Marcus growing up as neighbours and best friends. When Marcus loses his mother as a teenager, a woman who Sasha saw as a second mother, the emotion of the situation causes them to take their relationship to the next level, something that neither of them were prepared to handle. This causes a rift that lasts for 15 years until the two are reunited when Sasha returns to San Francisco and we get the opportunity for all that “romcom-y” goodness.

Wong and Park bring us a great movie with a couple of teary eyed moments and more than enough laughs, but the film has two really standout scenes. The first, and it really can’t be called a scene, is the entire portion of the film involving Keanu Reeves. Reeves is a brilliant actor and the material that Wong and Park provide him with just makes him shine. My wife and I were killing ourselves laughing and the lines coming out of his mouth are some of the most awkward, yet best lines I’ve ever heard. Saying anything else would spoil it, so I’ll leave you with this – imagine the most pretentious, rich asshole ever and I think that nicely sums up Reeves’ character in this film. The second standout is actually the credits. Marcus has a band that performs at various points during the film and it turns out that Park is quite the rapper. In the final scene of the film, he wonders if people know about his interaction with Reeves and Sasha suggests that he write a song about it. The song played over the final credits is that song. I was going to quote it but I think it ruins the Reeve’s scene. So, instead I will say that it is awesome and needs to be listened to closely to catch some of the nods to Reeve’s acting career.

At the end of the day, this film is exactly what a romcom is supposed to be. A fun, heartwarming reminder that miracles just might exist. If the film isn’t enough to fill your day with a little more brightness, you may have just gotten confirmation that you need to talk to somebody. Even my wife, the perpetual hater of romantic comedies, found this movie enjoyable. The movie is available on Netflix, so give it a watch the next time you’re scrolling the app looking for something to turn on. 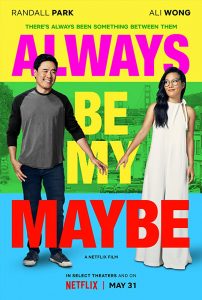 Movie title: Always Be My Maybe

Movie description: Childhood friends Sasha and Marcus have a falling out and don’t speak for 15 years. But when Sasha, now a celebrity chef in Los Angeles, returns to her hometown of San Francisco to open a new restaurant, she runs into her old pal -- a happily complacent musician still living at home and working for his dad. Though the two are reluctant to reconnect, they soon find the old sparks — and maybe some new ones — are there.

The New Romantic is a fun take on the traditional RomCom genre. Hopeless romantic Blake (Jessica Barden) chronicles her misadventures in love in a column in the school newspaper, but finds said column in jeopardy […]