The American Dream and Other Fairy Tales is a documentary from Abigail Disney, the granddaughter of Roy Disney (brother of Walt Disney and co-founder of The Walt Disney Company), that looks at the inequality in America. While the focus is primarily on The Walt Disney Company and employees of Disneyland, it tries to take a broader look at capitalism in America and how we’ve gotten to where we are. There’s no denying that it is an interesting and popular topic of discussion and the documentary does a great job of presenting a singular viewpoint on the topic.

If you’re a regular reader of my reviews, you’ll know that I often say I don’t like documentaries and then find myself loving every documentary that I watch. That was not the case this time. I found the documentary to be interesting and informative, but I realized where it feel apart for me was the presentation of the singular viewpoint. I don’t disagree with the film’s viewpoint, there is very clear evidence of growing inequality in the United States, however this film really doubles down on the idea that income inequality is the source of all inequality, or at least that was my takeaway from the film. I would have love to have seen other viewpoints, not necessarily counterpoints to the claim, but options for other sources of inequality would have been a nice way to frame the filmmakers’ views.

I’m very torn on reviewing this film on its merits as a film vs reviewing it for the content contained within, but there are a few points that I feel are worth making. The film is, as I mentioned, told from a singular viewpoint – the idea that income inequality is the root of all evil.  It is the presentation of that viewpoint that I take issue with. The film was in progress when COVID first hit and that definitely further shone a light on income inequality and demonstrated the divide that exists between the working class and the elites. However, that same painful imagery that was designed to evoke empathy and sympathy instead helped me see the hypocrisy of the film. Here, you have someone with an estimated net worth north of $100 million interviewing people who are sleeping in tents and talking about being unhoused while she video conferences in from a room in her home that is bigger than my apartment. This bothered me and pulled me from the message the documentary was attempting to convey. Individuals were suffering and instead of easing their suffering, it was put on display. I had expected a press kit or website to accompany the film to explain what had happened behind the scenes to help these individuals, but here was nothing. Seeing someone who has more than 10x the net worth required to be considered a one percenter conducting these interviews made me feel like this was exploitation, not unlike the worker exploitation she was working to highlight and that just didn’t sit right with me.

Then you have the subjects that the filmmakers interviewed. They were Disneyland employees making $15/hour. In the United States, minimum wage is defined as $7.25 per hour, although many states define a higher minimum wage. It feels like there are better companies to target than Disney that are paying their employees even less, which would further demonstrate this issue. Is the filmmaker focused on Disney because of her last name, rather than because they were the most evil option available? In fact, and I don’t recall the film calling attention to this, at $15/hour, that puts Disneyland employees right around the median income in the United States based on this graph from Data Commons, which pulls data from census.gov. On top of that, the financial choices didn’t always make sense – there were a lot of pets included in this documentary and pets are very expensive. One of the Disneyland employees wanted to complete post secondary education, but not the free post secondary education that Disney provides. We don’t always get the things that we want and I felt like I saw people pointing to things that they wanted, rather than things that they needed quite often in the film.

Is it heartbreaking? Without a doubt. I teared up more than a few times hearing the stories of the individuals involved. I suppose we’re all human and we’re all fallible and that those mistakes shouldn’t take away from who we are and where we want to go. There’s also being realistic and owning a clowder of cats may not be the most realistic choice for someone struggling to get by. I’m nitpicking because these things don’t take away from the struggles the subjects endured, but they also don’t help lessen those struggles. It is painful to see how C-suite salaries have increased while blue collar salaries have stagnated. It is painful to see how that leads to struggles for those involved and the sacrifices they have to make. There is no denying any of that. The film is an eye opener, I just wish it had been composed in a way that made it beyond reproach.

The simple fact is that shining a spotlight on income inequality while living in your own ivory castle doesn’t disqualify you from being a hypocrite who is living on the hard work of the very people you are exploiting for your spotlight. It is similar to how being a low income individual doesn’t prevent you from taking the blame for poor financial choices. While I think the message of the documentary is important, I don’t feel it delivered the message in a meaningful way and that the message will be lost due to the choices that were made.

The American Dream and Other Fairy Tales opened in Orlando on September 16 and in New York, additional markets, and on VOD on September 23. 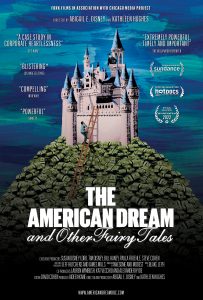 Movie title: The American Dream and Other Fairy Tales

Movie description: Abigail Disney looks at America's dysfunctional and unequal economy and asks why the American Dream has worked for the wealthy, yet is a nightmare for people born with less. Using her family’s story, Disney explores how this systemic injustice took hold and imagines a way toward a more equitable future.

I’ll say it right off the bat… you need to give The Virtuoso a chance before you turn it off. I almost abandoned the film because the majority of the film is just Anson Mount having […]