In August of 2019, my wife and I attended P!NK’s Beautiful Trauma World Tour stop in Toronto. I liked some of her songs, but I wasn’t what I would call a fan… I was indifferent. My wife, however, REALLY wanted to see the show… so we went. When I left the show, I was a fan. P!NK put on one of the best performances that I have ever seen and I would drop everything to see her perform live again. What I didn’t know at the time, was that two months prior, they had begun filming behind the scenes footage of P!NK and her family. Footage that would eventually become P!NK: All I Know So Far.

I’ve learned that somehow, someway, organized chaos can work. My family loves the road.
These will be some of our favorite memories for the rest of our lives.

The film provides a first hand look at life on the road for P!NK and her family. We get to see their interactions during rehearsal and in the hotel from when they landed in Amsterdam (the show was on June 16, 2019) until P!NK’s performance at Wembley Stadium in London (June 29/30, 2019). We get to meet P!NK, her husband, Carey Hart, and their two kids, Willow and Jameson. The documentary isn’t about P!NK the superstar performer, it’s about P!NK the employer, P!NK the mother, and P!NK the kickass person.

I was supposed to be a rock star so I never …had to do anything I didn’t want to do.
Now I’m in charge of 225 people and two insane children
and all of this mega mega responsibility — and it’s worked out okay.

Whenever we turn on the TV, we’re bombarded by celebrities that are awful and their children that are spoiled. Rarely do we hear about how awesome some of them are (Keanu Reeves comes to mind as one of the few exceptions). One of the reasons I’ve fallen in love with indie films is that everyone I speak to in that industry is down to earth, friendly, and just all-around awesome. This film put P!NK on my list of kickass people. Watching the documentary, I truly believe that her and her team are a family, that they care for each other and are genuinely happy to be around each other. When her kids are on screen, you can’t help but love them – they are sweet, kind, and full of energy.

Nothing surprises me anymore. Jameson loves the camera, but we already knew that.
Willow loves to climb the walls. We knew that too.

To see P!NK with her children, you can’t help but smile and laugh… their happiness and joy is infectious. The director, Michael Gracey (The Greatest Showman), brilliantly brings together the energy of P!NK’s performances and the downtime with her kids. That’s not to say that the downtime isn’t filled with energy because it definitely is. One of the most impressive things about the documentary is watching P!NK go… she’s got an incredible energy level. She’s also amazingly fit – her endurance is awe-inspiring. Given the energy of her music, I’m surprised that she hasn’t launched her own series of workout videos… I’d definitely buy them.

My kids have never seen me as anything other than this.

Beyond the glamour and glitz of P!NK’s shows, beyond the activities of her and her family… the little moments really shone through in this film. A tender moment between mother and daughter. A joke shared between husband and wife. A mega-famous celebrity stopping people on the street to ask to take their picture. A letter written by a suicidal fan that brought tears to my eyes as P!NK read it to her husband in a black and white scene. It is all of these little things that take you out of the eclipse that is P!NK the performer and into the life of Alecia Beth Moore, mother, wife, and entrepreneur. I don’t know that the story could have been better or more beautifully told.

So, mark your calendar, make sure your Amazon Prime subscription is paid, and gather your entire family on the couch on May 21, when Amazon Studios drops P!NK: All I Know So Far on Prime Video globally. 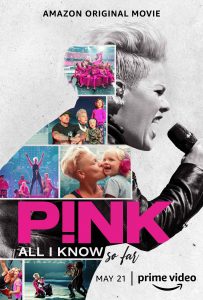 Movie title: P!NK: All I Know So Far

Movie description: Join award-winning musician P!NK as she embarks on her record-breaking 2019 “Beautiful Trauma” world tour and welcomes audiences to join her chosen family while trying to balance being a mom, a wife, a boss and a performer. Mixing footage from the road, behind-the-scenes interviews and personal material, director Michael Gracey (The Greatest Showman) gives audiences a glimpse behind the curtain of the circus that she calls life.