With this film, I feel that it is important to set expectations correctly. You are not getting a Hollywood blockbuster. You’re not getting something that is completely polished, that shines with big name celebrities. Instead, you’re getting an honest film that gives you a look inside dating in a digital world. The film had a Kickstarter campaign and it feels like the type of feature that you would find on Kickstarter – something a little less than perfect but filled with passion.

This is a film about a group of 20-somethings and their quest to find love. The movie shines because of the nature of these quests. It isn’t a “we live in a small town and our parents are bitter rivals, so we are obviously star-crossed lovers” type situation. It also isn’t the classic “Oops, I spilled my coffee on you, let’s fall in love” situation. Instead we see break-ups, rebounds, jealousy, and despair. We get happiness and excitement, awkwardness and cringe. We see online dating, introductions between friends, and even someone who repeatedly eats at the same restaurant hoping to catch the server’s eye. Ultimately, we see real life.

Fair warning, the first 10-15 minutes of the film are a little slow and it stumbles while trying to find it’s pace, but once it does, you’ll find yourself hooked. I was cheering on several of the characters and really hoping for a few specific love connections to work out. I could feel their awkwardness at times and smiled with them when they succeeded.

The writer and director of the film, Michael Feinstein, had this to say about his first feature:

As of today, there have been very few depictions of online dating in film and when there is one it often either portrays it as something that you use because you’re desperate or because you want to get laid. These narrow portrayals discount and do a disservice to all of the complicated and important stories and connections that have been made by online dating. In this film I wanted to express both the wide range of motivations and emotions that cause so many different types of people to put themselves out their online as well as the varying consequences of that. By making the film an ensemble romance that shifts tonally from comedy to drama and back again I feel I was able to depict several different types of perspectives that aren’t usually seen in the average romantic comedy. Because we financed and shot this film independently we were able to portray scenarios that haven’t been depicted in film before and challenge the status quo of how certain types of characters are presented. I wanted to make a nuanced comedy in the vain of the Altman, Ashby, and Brooks films that refused to sacrifice the complex message of their stories for the sake of a joke. By making this film independently and having a cast and crew that was made up primarily of millennials who related to the story of the film we were able to create a level of emotional honesty that is uncommon in most Hollywood comedies.

I think that Mr. Feinstein may be getting a little too excited about his film and that excitement may be going to his head just a bit. There are some funny scenes in this film, enough that I think it fits the category of Romantic Comedy, but this film should not be confused for a comedy. It is more of a RomCom meets dramedy. Knowing that, I think it’s hard to say that this has a level of emotional honesty beyond most comedies because this isn’t most comedies. It is, however, a good romantic comedy and, unlike other RomComs, I think this has a much greater sense of realism.  I think that he should be proud of the film because he created something quite interesting, it’s just important to recognize which lane the movie belongs in and it definitely isn’t pure comedy.

One thing that I really enjoyed about the direction of the filming was the way that certain interactions were portrayed. During one scene, which appears in the trailer, a text message exchange is presented. Instead of a split screen or a back and forth between the two “texters”, we see one person portrayed as being in the room. This technique is used a few times with repeated success and was one of the aspects of the film I really enjoyed. A similar method was used when questions were posed about people’s childhood or their past relationships. I don’t think I’ve seen this used in film before and I thought it was a really creative way to add to the story.

When it comes to the actors, I think we’ll see a lot of great things from several of these performers in the future. Josh Margolin stole the show as Ben and I’m excited to see him in the film Deep Murder when it is released. The women in the cast were also amazing. I was excited to see Megan Guinan, who was previously on the TV series Limitless (which was canceled too soon), and really enjoyed her character. Both Nikki SooHoo and Gabriela Lopez were excellent as Rachel and Gabriela.

I was torn on how to rate this film. It was unique enough to have earned a high rating. My gut instinct was that it was going to be a 2 or 3-star film when it started. When it finished, I was rather set on 3.5-stars. Then, however, I realized that much of the film was done documentary style, something I typically hate. In this case, I didn’t hate it. It actually added to the film. Had this been a 4-star film, I probably would have given it 5-stars just for handling that style so well, but given where I landed, I think it’s safe to call this a solid 4-star film. If you’re looking for something flashy and polished, this probably isn’t for you… but, if you want a bit more reality and truth to your movie, a bit more of a study of human nature, then you’ll probably enjoy this film. 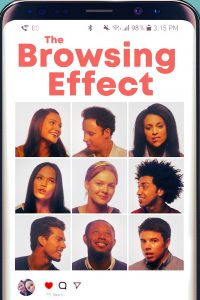 Movie description: The seemingly endless possibilities of dating apps send a group of friends into a whirlwind of sex, jealousy, and self-doubt in this ensemble comedy that examines dating culture in the age of swiping.

In what might be a first for me… I am not sure how to rate this film. I do, however, think that it is important that I include this note from the writer/director before I […]