If you make one mistake while you read this review, it will be reading past the first paragraph. Stop right now. Do not read other reviews. Do not watch the trailer. Do not Google the movie for fear of spoilers… simply watch this film. You have my permission to abandon this review and go and click the play button as soon as possible. This is a twisty, turny thriller that you do not want to miss. However, if I haven’t earned your trust, I will finish this review and hopefully sell you on a movie that I thoroughly enjoyed.

Wander is the story of a broken man. Aaron Eckhart plays Arthur Bretnik, a conspiracy theorist that lost everything. In a past life he was a cop, but after losing his family to a car accident, he snapped and his psyche broke. The man we are left with is a shell of a person; a shadow that no longer belongs on this earth but remains simply because he has unanswered questions. Eckhart brilliantly portrays this broken man, reminding us how fragile our humanity is.

Life, loss and the conspiracies that surround our hero, Arthur, brings forth a new concept of surrender.

What does it take to move through a grief so grand it shakes the foundations of reality? What would one man do to uncover a world of lies? He, Arthur, would cross all fears, leap into the unknown and bravely take down the giants that control so much of today’s world.

Eckhart’s award worthy performance is supported by a stellar cast including Tommy Lee Jones, Katheryn Winnick, Heather Graham, Raymond Cruz, and Brendan Fehr. At 74 years old, it is great to see Jones in front of the camera, he hasn’t appeared in as many movies as I’d like lately and I’ve always loved his work. In Wander, he plays Arthur’s only friend, Jimmy, a fellow conspiracy theorist that hosts a podcast with him.

The opening scene of the film leaves you wondering. A woman running from an overturned vehicle past the Wander town limit sign. Suddenly, her chest explodes and she drops dead. We get a glimpse of a cover up and then we follow the remainder of the film from Arthur’s point of view. While hosting their podcast, Jimmy and Arthur get a mysterious phone call and that is what really sets the film in action. From this point forward, I will not discuss the twists and turns of the movie and I apologize if you read a review from a critic that doesn’t know how to contain spoilers. The film reminds me of Gone Girl in many ways as it keeps you guessing until the end. As such, I have to recommend you avoid all spoilers and watch this before it is spoiled. This is the type of movie that will keep you on the edge of your seat wondering what will happen next.

One thing that I do want to talk about is the soundtrack to this film. It is an amazing soundtrack that adds so much context to the film but, at the same time, is slightly detrimental. The soundtrack is so haunting and beautiful that the volume is increased dramatically and this, at times, overwhelms the dialogue. My TV has a volume range from 0 to 100, and I find that I usually keep it between 25 and 35. For this movie, however, I had to keep playing with the volume, increasing it to 45-50 for the dialogue and then back down to 25 for the soundtrack. It reminded me, at times, of the way that commercials crank the volume over the regular TV show. This has long been an issue with films, but in this one it seems more evident. It is not a major issue, but I want to bring it up as I think it is, honestly, the biggest flaw I could find with the film.

Arthur’s journey pulls back the curtain on dark and deeply disturbing atrocities. His time in the town of Wander sheds light on those whose voices have been silenced through settler colonial state sanctioned surveillance and control. At the heart of Arthur’s conspiracies lie the truth that, Indigenous women, 2Spirited warriors, BIPOC and displaced peoples have been a continual target and victims of governmental subjugation and violent practices.

As a mixed Anishinaabe Algonquin female director these themes are important to me. I have collaborated with musical artist Jeremy Dutcher to include the Medicines of our Ancestors’ songs, as a form of critical healing now and for the future.

At the end of this day, I honestly loved the film and I think anyone that gives it a chance (and enjoys thrillers) will as well. This is the type of movie that I expect when I see thriller, not that border line horror/thriller genre that people keep trying to create, just a classic thriller. When I think of thriller, I’m always drawn back to the 1997 film, Breakdown, starring Kurt Russell. I think Wander has a little more mystery and intrigue than that movie… but that’s the movie that I always have in my head when I think of a thriller and Wander definitely fits the bill.

Wander will be released in Theaters, On Demand, and Digital on December 4. 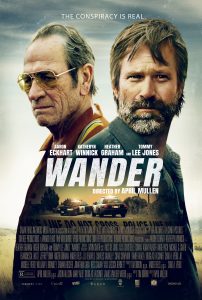 Movie description: Aaron Eckhart, Tommy Lee Jones and Heather Graham star in the edge-of-your-seat thriller following Arthur Bretnik, a paranoid private investigator with a troubled past. After Bretnik (Eckhart) is hired to investigate a suspicious death in the town of Wander, he becomes convinced the case is linked to the same ‘conspiracy cover up’ that caused the death of his daughter.