This will, unfortunately, be a short review. That doesn’t mean that the documentary was bad, quite the contrary actually, I rather enjoyed it. My wife and I were looking for something to watch and scrolling the Netflix listings, when we came across Perfect Bid. My wife is always up for a documentary, but I’m a little more picky about which ones I watch. I often find that I’m more interested in the concept of a documentary than the documentary itself and end up reading articles that I can consume faster than the film. In this case, however, the film wasn’t overly long and the topic was interesting. I love hearing about people who beat the system.

The documentary looks into Ted Slauson, a The Price is Right superfan who tracked and memorized the prices for every item on the show. Ted realized that items had repeated appearances and would track the those prices, first in spreadsheets and eventually writing a program to help him with his memorization, essentially creating his own The Price is Right computer game. This action alone, however, does not make the story. It would still be an interesting story to hear that Ted gamed the game in order to win a bunch of prizes, but the truth is that after numerous attempts to get onto the game (helping others win prizes along the way), Ted had a failed run on the show. This is what makes the documentary really interesting.

After his appearance, due to the rules around the show, Ted couldn’t reappear on the show and lost interest. However, when the rules changed and he could once again compete, he built an updated program and started prepping to appear on the show again. During this time Bob Barker retired, the shows producer was let go, and Drew Carey was brought in as the new host. That’s when the unthinkable happens, someone wins the Showcase Showdown with a perfect bid.

This documentary delves into that perfect bid, how it happened, and the fallout. That is where it gets to be really interesting with rumours, controversy, and uncertainty surrounding the future of the show. The story draws you in and, as soon as it ended, I found myself digging around on the Internet, reading articles and looking up stories. Without a lot of reading, it’s hard to get to the facts that are presented in the documentary, many shorter articles tell a completely different story. This makes the documentary even more spectacular.

This is well worth the time investment to sit down and watch. You can tell that this is a truly independent documentary by the very low production value and cheesy CGI graphics, but when you have a story this compelling, that doesn’t matter. One word of warning is that Bob Barker is getting old and he’s not the shiny Bob Barker of The Price is Right, his age is showing and my wife had to ask if it was actually him. That said, seeing Bob Barker and Roger Dobkowitz talk about the show is definitely one of the highlights. The film expertly splices current interviews with stock footage (including some unaired studio footage) to give you not only the story of the perfect bid, but also great behind the scenes look at the world of TPIR. 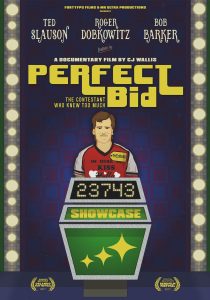 Movie title: Perfect Bid: The Contestant Who Knew Too Much

Movie description: The film explores how Ted became adept at memorizing prices of prizes and products on the show from its inception in 1972, culminating in him helping a contestant bid perfectly on a showcase in 2008 - which resulted in one of the biggest controversies in game show history covered in Time Magazine, Esquire, TMZ and more.

Typically, when I watch a movie, I write my review within 30 minutes of finishing it. Occasionally, I may wait a day. Volition is the first film that took me days to digest and, honestly, I’m […]