Tonight, during the Super Bowl, Amazon released a Hanna Season 1 trailer. Additionally, they released the first episode on Amazon Prime for 24 hours following the game. I was a big fan of the 2011 film of the same name, so I’ve been excited to see this series and the teasers have kept me interested. Tonight, I sat down with my wife to watch the first episode and I was not disappointed.

For those that don’t remember the original film, or just need a refresher, Hanna is a 16 year old girl raised in the wilderness by her father, a former intelligence agent, who trains her to be a killer with a specific target in mind. While Hanna may not be familiar with modern conveniences, or the latest episode of whatever show teens are watching, she’s able to survive in the wilderness and defend herself in any situation.

The opening episode starts with Hanna’s father retrieving her from a government facility where she’s being held as a baby with many other infants. The first few scenes are set with Hanna as an infant and make it clear that there is a very serious attempt underway to recover the child. The introduction ends with Hanna’s father running through the forest with Hanna in his arms and we flash forward to Hanna, as a teenager, killing a deer. This is one of the many scenes recreated from the original movie and speaks to Hanna’s upbringing. The remainder of this first episode introduces Hanna and her father, Erik, living in the wilderness. It helps the viewer to understand what their lives are like and how starved for human interaction Hanna is as she encounters a young Polish lumberjack. There’s a really great scene with a Snickers that demonstrates Hanna’s innocence and strength. 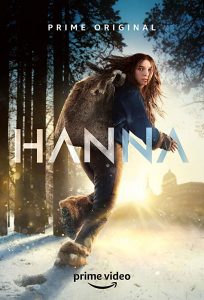 Description: A high-concept thriller and coming-of-age drama, Hanna follows the journey of an extraordinary young girl raised in the forest, as she evades the relentless pursuit of an off-book CIA agent and tries to unearth the truth behind who she is.