The first time I heard about Bushwick, I knew I wanted to see it. I toyed with renting it on iTunes, but couldn’t bring my wife to watch it, eventually it was released on Netflix and I finally said, I’m watching this, you’re welcome to join me. She asked what it was about and I couldn’t really respond, “Well, New York was invaded, I’m not sure by who and a guy and girl are trying get to safety. It doesn’t really matter though because it stars Dave Bautista.” Her response, as is typical when I mention a celebrity by name, “Who is that?” “He plays Drax in Guardians.” She immediately agreed to watch it. For me, Bautista was a huge selling point – as it apparently was for my wife – as he performs phenomenally in most roles and is highly underrated. Brittany Snow (Pitch Perfect) was the perfect icing on the cake and they worked so well together that the movie kept me on edge from start to finish. While it wasn’t, as far as I can tell, supposed to play out in real time (it went from day to night with quite a bit of time in between), it felt pretty close. The realism made me feel like I was there, in the situation, fighting for survival. In reality, the only thing fighting for survival was the edge of my couch that, for the majority of movies 93 minutes, had to support my weight.

My first thought was that in the current US political climate, this movie could be a reality, it doesn’t seem that impossible. This was echoed by the directors, Cary Murnion and Jonathan Milott, in the director’s statement I read while preparing this review:

Bushwick, conceived of seven years ago, was inspired by actual events. Former Texas Governor Rick Perry’s comments that instigated a small Texas secession movement, the U.S. Government’s responses to natural disasters, U.S. Foreign Policy, and global terrorism – these all fueled the story. Prior to production of the movie, we witnessed more terrorism – including the Boston Marathon, San Bernardino and the 2015 Paris attacks. The Paris attacks actually occurred the day before we started production, blurring our vision of the movie with reality. The news footage was surreal to see, as we had recently designed the look of our black-clad mercenaries. Our fictional storyboards looked eerily similar to the scenes we saw on the news from Paris – contemporary storefronts and cafes smoking and destroyed as snipers hid on rooftops. Recently, as we finished the long process of post-production, we again watch as the United States becomes even more politically, economically and racially divided because of the 2016 Presidential election.

In the movie, we start with Lucy (Brittany Snow) on her way home to see her family with her boyfriend, Jose. The trains are stopped, the station empties, and they find themselves alone. The silence is deafening as they leave the station and encounter a man encompassed in flames. They nearly exit to street level to the sound of gun fire and explosions but duck back inside. Jose, leaves the safety of the stairwell and an explosion quickly removes him from the story. As Lucy tries to find help and move forward, she finds herself in a bit of a predicament with a pair of low life street thugs, she is rescued by Stupe (Bautista), who is on his way to Hoboken to find his family. Lucy sticks with Stupe, trying to get to her grandmother’s house. Along the way, they dodge bullets, Stupe is injured, and the neighbourhood finds itself shrouded in chaos.

Along their journey to safety, they encounter danger and heartbreak. The movie shows just how devastating a situation like this can be to a small community. The movie provides a few “it must be allergies” moments and a shocking ending that I’d prefer not to spoil. I hate when I read a movie review and everything about the movie is revealed to me. Instead, let me say that I wholeheartedly endorse this film. It wasn’t quite film perfection but it was rather enjoyable and well worth the watch. If you have a spare hour and a half, this is a great way to spend it. 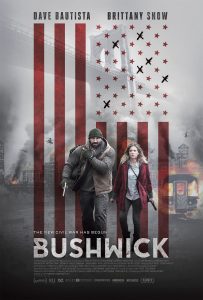 Movie description: An invasion in Brooklyn finds two unlikely companions relying on each other for safety and survival, unsure of who is attacking or why.

There were two reasons I was eager to see Daniel Isn’t Real. The first was that Shudder was involved. I’m quite impressed with their films and enjoy watching anything they release. The second was Patrick Schwarzenegger, […]

MANDIBLES is above all a genuine and sincere comedy about friendship. It’s also, thanks to the presence of a giant fly at the heart of the story, a fantasy film. Quentin Dupieux, writer/director I’m not […]