I’ve said it before, but I’ll say it again, one of the greatest things about reviewing films is finding indie gems that I would have completely overlooked browsing on iTunes. Even better is that I get to share those films with you and hopefully help you find something amazing. I think that amazing is the only way to to describe One Good Reason. The film falls into the same category as Gone Girl or Wander.  Not that it is the same as those films in any way, I’d actually say this film is rather unique, but, like those films, One Good Reason is a film that you don’t want to have spoiled. You want to see it as soon as possible, which is really easy to do since you could go to iTunes right now and rent the movie or, better yet, buy it because you’ll want to show this to friends who haven’t seen it. I can count on one hand the number of films that I’ve reviewed and then purchased, but I immediately bought this one. It was too good to not have in my collection.

So, what is this film I’m gushing about? It’s the story of a man who finds a journal and, as he reads it, experiences the stories told within. Without ever meeting the author of the journal, he falls in love with her and, ultimately, seeks her out. Scott Sawyer plays the similarly alliteratively named Wyatt Williams, a writer looking for his next story when he finds a journal belonging to an unnamed woman (Julia Juhas). The film shows us Wyatt’s day to day life while incorporating vignettes of the unnamed woman’s life. We bounce back and forth between these two separate series of events until circumstances cause them to interweave and eventually become one. I was lucky enough to sit down with Scott and Julia, the film’s stars to talk about the film. Scott also wrote and directed the movie and he shared a bit about the script’s origin.

It was probably in 2000 that I wrote this script. It was inspired by a moment of reality. I was in, I think, Bay Station in Toronto. I found a book that was on top of a payphone that I was using. I opened it up and I was like, “Oh someone forgot this here.” There’s lots of people that would do a various spectrum of things with found property and I was like, “At least if I take it, I know someone is gonna get it back.” Of course, I didn’t know that Bay station was a lost and found. I took the book and understood it had a personal nature to it. It was a day planner. It wasn’t a journal but it had very personal little things in it. Like one of them was a list, this year things to do – finish degree, fall in love. So, I ended up taking it and sifting through it and, in the doing, getting kind of a sense of parts of this person. I found some numbers, so I dialed them and said, “Hey, there’s a person in Toronto that you might know that had your number in their book, so maybe you could help me track this person down.” And it worked.

I found the story very heartwarming. As a sucker for Hallmark films, that strikes me as a perfect origin story. I also thought that the timing of the film was interesting. It was first written in 2000 and wasn’t filmed until a decade later. Finally, it took nearly another decade for people to get a chance to watch the movie. That delay between the first iteration of the script and the filming allowed for numerous changes, some of which Scott described.

I rewrote it nearly 10 years after its initial first draft and I was inspired by Deadwood. The writer of that show has such a love affair with the English language. To take that and fuse it with a western setting was so unexpected and so brilliant. I was inspired by that love of the language and I thought, “How do we make this, on paper, kind of boring concept – up until a point at least. Boring in that it was like not a lot of action going on and they’re static – they were in a bar. How do you make that work? How do you make that special? It wasn’t in my first draft, but how do we make it sing. So, I don’t know. I think that in first 15 minutes of the film you might think that it’s incredibly verbose and even, what’s the word, pretentious, but those characters just have their schtick and when things get serious the banter steps aside and makes way for the story.

I started laughing as Scott told this story. I loved the film, let me be very clear about that, but I did not love the first 15 minutes. I used the same words as Scott, ‘verbose’ and ‘pretentious’ when describing the start of the movie to my wife. I stuck with it and I’m so glad that I did. Some people will likely enjoy the start of the film, I just wasn’t expecting it and I’m wondering if I’ll have the same experience when I re-watch the film (something I plan to do very soon). So, when you watch this movie, give it a chance and don’t get frightened away by the bar scenes. You’ll be in for an amazing experience if you do. I would like to share other aspects of the story that changed, but that would spoil the movie, so I’ll leave it at that. So 10 years later, the movie is filmed, and they talked a little bit about that process as well.

This project was so special to so many people at that time and even now that it’s come up – so many of the actors have gone down different avenues and to have this show up at a time when we could use a little hope, it’s such a beautiful gift. Bringing that time back it’s just so nostalgic. Oh My gosh. That class we were in. Scott and I were in an acting class together. It was like no other class, it was very, very special. It was about people creating their own work. It was very much a community and very supportive. And half the people from the film were in the class.

They were tested, tried-and-true. I knew they could do what I needed them to do. Plus we rehearsed a lot, which some actors probably weren’t huge fans of, but it was just that we got one shot at this, I didn’t know if I’d ever make another one of these, so we had to do it right.

It was very collaborative. I think we all spoke a similar language in terms of approach.

Here we are, nearly a decade after that, and the movie is finally available to the masses and it’s available because a fan of Scott’s comic work also worked at a film distribution company. For those that are unaware, Scott is also the writer and artist behind North, a Canadian comic book series. As a huge fan of comics, I look forward to reading the series at some point in the future. On the call, he also shared a potential upcoming project and it sounded amazing, so definitely keep your eyes peeled for future work from him.

At the end of the day, I’m not sure that I can give you one good reason to watch One Good Reason, but I can give you many good reasons. I want to reiterate that you need to stick with the film, even if the opening scenes are hit or miss for you. If you do, you’ll be treated to a film that astounds, that tests the limits of human imagination, and that reminds us that sometimes the idea of love can be as powerful as love itself. It is so powerful that I finished the film and sat on my couch in awe, my mouth agape, as I tried to reconcile the few minutes that I disliked with the remainder of the film that I loved. The film is filled with hope and love and the occasional gut punch. It is tender and angry, humorous and upsetting. It’s a bit of an emotional rollercoaster that I’m excited to introduce my wife to and I’m happy to tell you all about.

In writing this review, I had originally given the film 4-stars. That intro knocked it off the 5-star ledge for me, but as I’ve been writing and after speaking to Scott and Julia, it feels unjust to punish those opening scenes. When you talk to these two that have been friends since before the film, you can feel a passion that is nearly unparalleled. Scott was willing to share intimate details and tell the journey of the film to a complete stranger and Julia, who lit up the call with an infectious, non-stop smile, made it feel like the time spent filming was almost magical in nature. To diminish this film in any way would be a crime. Once the story gets going this is easily a 6 or 7-star film (still counting out of 5 stars).

Do yourself a favour and check out this phenomenal film this holiday season. Curl up with a loved one and let this film remind you how special they are and how important it is the cherish those around you. The conclusion of the story blew my mind, as I’m sure it will yours. So, here is my offer to everyone. After you watch the film, if you want to discuss it, reach out on social media. I will happily setup a call to chat about this movie with everyone and we can share our takes on the end of the movie without lacing this review with spoilers.

One Good Reason is available now on iTunes and other VOD. 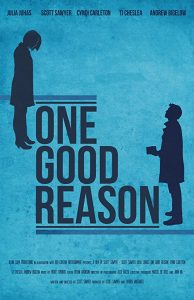 Movie description: Frustrated writer Wyatt Williams finds his new muse in the pages of a woman's lost journal, and the prospects of a new love and a new book are much to celebrate. That is until the lovely subject's stories take a turn for the worse and her last entries reveal a woman on a dark path. With so much to say, and so little time, Wyatt must retrace her steps through the pages, never meant for his eyes, searching for clues that will lead him to a woman on the edge.