Sometimes when you watch a movie, you spend more time wondering why you’re still watching than you do analyzing the film. Other times, you don’t realize until the film is done and realize you won’t get those 84 minutes of your life back. In small pieces, individual moments really, there are glimpses of mediocrity in this film… just enough to keep you hooked; to make you think that something really interesting is going to happen. In 86 Melrose Avenue, that something interesting never happens.

The film pulls a bit of a fake out. It makes you think that the film is about Travis, a former marine with PTSD, but, in reality, he’s just the catalyst for parable about not judging a book by its cover. The idea behind the film seems to be that in a shared experience, you are often unaware of the past experiences of those involved and how they may shape their actions. If you take our current shared experience of a global pandemic, that seems like sound advice, unfortunately, the movie really likes to be around the bush. Instead of handing you that message, it vaguely skirts around it, hoping that you’ll trip and fall into it.

If it seems like I’m being harsh on this film, that’s because I think that writer/director Lili Matta had a great idea and then executed it so poorly that very few will stick with the film long enough to figure out her attempted point. The film starts with Travis taking the attendees of a gallery showing hostage and then jumps back an hour to him returning home from work. There, we find his wife having dinner with an old “friend” of hers. The friend, a snooty software developer, constantly pushes Travis to talk about the war until Travis snaps and tells the friend to leave. When the man refuses, Travis pulls a gun. Instead of leaving, the guy attacks Travis and the gun slips out of Travis’s hand as they topple to the floor. As they fight, Travis regains control of the gun and shoots the man. He then freaks out and runs out the door, bringing us back to where the film began.

I feel like there’s a lot of problems with this intro:

At the gallery, we meet the most neurotic and quirky set of attendees anyone has ever conceived. They are mostly ridiculous in their dialogue and actions… this is actually one of Matta’s weakest spots, the dialogue, although often delivered by bad actors, was awful. At times, it was painful to listen to the cast speak. Once these group is taken hostage, we see glimpses of their pasts – single snapshots of single moments that have defined their lives or, at the very least, their actions that night. What is that saying again? “Don’t let your past define your future.” Clearly, none of these people had heard that statement before.

Even if you can look past the bad acting, the atrocious dialogue, and the poorly communicated message, there are problem other reasons the movie will push you away. The first is the end, the stories I cared about were either glossed over, minimized, or ignored – instead the least likeable characters were given the grandest conclusions. Also, based on the closing scene, the director was watching a different movie than you were as the final moments that they want to leave you with are less than ideal, it’s actually a conclusion that makes little sense given the rest of the film. It was quite the head scratcher of a moment to figure out why that was the conclusion and why other stories were left untold.

If that isn’t enough of a reason, consider the continuity issues with the shots. In the earliest scenes of the film, as the dinner drama that fuels our story is underway, the film uses an over the shoulder shot to show both sides of the conversation. Travis, who moments before the shot started had chicken and pasta on his plate, suddenly only has pasta. The camera returns to him and he still only has pasta. As he goes to speak again, the camera comes back to him only to find his chicken back on his plate and, in the final back and forth shot, his entire plate is suddenly blocked a bottle of wine. At another point in the film, someone is drinking a Coke, in the next scene they are opening said Coke. Through out the film, there are very obvious continuity issues that are front and centre. With the Coke for example, even though you had already seen the person drinking from it, the can opening is louder than the dialogue and stands out plain as day. Finally, watch when the gun is discharged in the gallery… a photo smashes and someone gets cut, based on the dialogue, by the bullet. None of the angles appear to be correct for that to happen.

I would not recommend watching this. It is a great idea that is poorly written and horribly executed. It even comes with a very forced and out of place piece of gun violence text at the end of the film.

86 Melrose Avenue was released by Gravitas Ventures on demand on April 20. 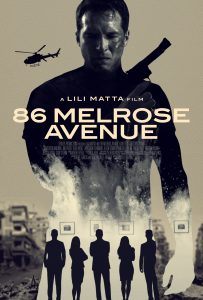 Movie description: A diverse group of people at a gallery opening is taken hostage by an ex-Marine suffering with PTSD and forced to confront their cultural differences, their pasts, and their looming mortality as time ticks away.